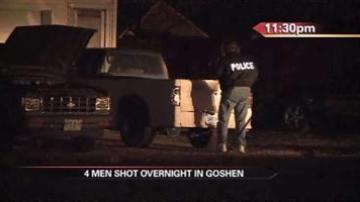 The shooting reportedly happened in the area of Middlebury and School streets in Goshen.

Police said that three people were taken to the hospital with minor injuries. A fourth person refused treatment.

Angel Marquez, 18, was treated for a gunshot wound to his upper left arm.

Jose Gonzalez, 19, was treated for bullet fragment injuries to his right thigh and back.

Juan Deigo Rodriguez, 18, was treated for a gunshot wound to his abdomen.

The fourth victim, 17, refused treatment for a minor abrasion.