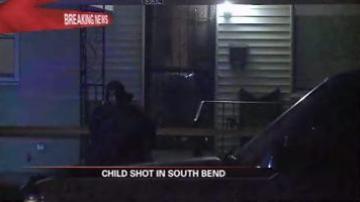 SOUTH BEND, Ind. -- South Bend police are trying to figure out how a 5-year-old boy was shot in South Bend late Thursday night.

The little boy is being treated at Memorial Hospital after he was shot once inside the home where he lives. The shooting happened on the city's West Side just before 9 p.m. in the 1300 block of North Huey Street.

Police said the boy was shot in an upper extremity. According to how the call went out to dispatchers, he was shot in the wrist and had uncontrolled bleeding. However, police said they were able to control the bleeding before emergency responders arrived.

The boy also had another wound. Police said it appears the bullet went through the boy's buttocks as well.

The boy was one of three children, all under the age of 7, inside the home at the time. Police said a babysitter was with the children and that the boy's mother was at work when the shooting happened.

Although the boy was shot inside the home, police had another working crime scene across the street at a nearby residence. Investigators said they collected evidence from a neighboring home that is related to the Thurday's shooting.

Police said they found two firearms, along with what appeared to be a bag of drugs inside the home. So far, investigators said they still do not know if either of the firearms found are the weapon that shot the young boy.