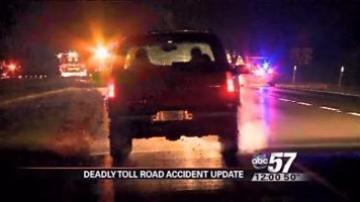 BRISTOL, Ind. – The Indiana State Police continue to piece together the tragic events that transpired Thursday night that claimed the lives of seven people on the Indiana Toll Road (80/90) near the 103.5 mile marker in Bristol.

Indiana State Police were called to the scene around 7:45 p.m. Troopers and emergency personnel from Bristol, Middlebury, and Osolo responded to a 911 call reporting a crash between a 2006 Freightliner semi tractor trailer and a 1998 Toyota minivan. The crash occurred in the eastbound lanes and came to a final rest in the center median, bringing both east and westbound traffic to a standstill.

The initial investigation by the state police and witness statements say that the driver of the eastbound minivan may have struck a deer and came to a stop or slowed down in the driving lane when struck by a semi from behind.

According to police, the minivan was compacted to about a third of its size, and the impact nearly pushed the bumper to the dashboard. Police said while there were 10 passengers in the Toyota Sienna, the minivan model only legally seats seven people.

Officers said none of the passengers were wearing seatbelts, but the infant who died was strapped into a safety seat.

A man and woman were airlifted to Memorial Hospital for treatment. The front-seat passenger and semi driver were transported to Elkhart General Hospital and are expected to be okay.

On Friday morning, the Director of Trauma Services at Memorial Hospital, Greg Bingaman, held a press conference regarding the patients’ current conditions. He said that both victims are in their thirthies.  The man is in critical condition and the woman is in serious condition.  Both patients have orthopedic and head injuries. One was conscious and the other was sedated as of 10 a.m. on Friday morning.

Troopers said according to a surviving passenger, everyone in the van was related, and lived in the Chicago area. They were on their way to a family reunion. Investigators found passports and visas from the Republic of Ecuador. The survivors do not speak English. Family members are in Michiana, to help identify the victims.

Police said they have been to South Bend Memorial Hospital, and were headed to Elkhart General Hospital Friday morning.

The hospital is in the process of notifying the victims' families.  Indiana State Police said they expect to release all of the ages and names of all of the deceased by Friday afternoon.

Officers said the driver of the semi tractor trailer, 24-year-old Jesse F. Donovan, is from Johnston, Rhode Island. The truck that he was driving is owned by Roehl Transport Inc. out of Marshfield, Wisconsin. Donovan was treated for minor injuries and was later released. A preliminary test for alcohol came back negative. Traffic was flowing smoothly Friday morning. Officers cleared the scene by midnight Thursday.

There are still remnants from the scene visible in the median where the crash happened.

Stay with ABC57 News for additional updates as this story develops.