Fire out at train derailment in Ligonier, crews working to clear tracks 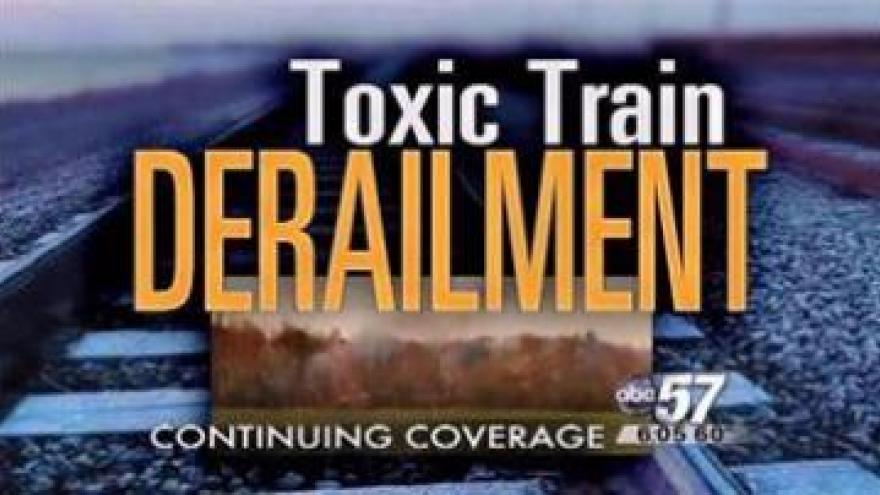 NOBLE COUNTY, Ind. -- We have an update from the Ligonier train derailment.

The fire is out in the sulfur cars. Crews are working on bringing the cars to a staging area and removing the remaining cars from the train.

The derailment happened around 5:30 a.m. on Tuesday. Originally, at least 25 train cars have fell off of the tracks at the Norfolk Southern crossing. Three cars were able to right themselves, so now only 22 cars are off of the tracks.

Police evacuated an area right outside of the area, following the derailment.

Officers are warning the derailment may have caused a possible hazmat situation and toxic smoke has been surging in the area.

Nine total homes have been evacuated. A chemical called toluene is on board the train, along with phosphorus and molten sulphur.

Because of the toxins in the smoke, firefighters have not been able to approach the crash to douse the flames. Their plan is to allow it to burn itself out. Right now, the fire is growing.

Our crews are not being allowed to get too close. They are pushing the media and crews back from the area for safety reasons.

IDEM is reporting chemical residue has spilled into the river and in drainage ditches on both sides of the railroad tracks. The water it spilled into is stagnant, but some of it did seep into the north fork of the Elkhart River. There is some concern about the environmental impact, but it is much less than previously feared.

Crews are working to contain the chemicals and not allow them to spread further into the river.

There have not been any reports of injuries at this time. However, officials are very concerned about the air quality and are monitoring it very closely. Families in the nine homes affected will not be allowed back into the area until tests come back showing the air is safe to breathe.

The American Red Cross and Homeland Security were at the site to assist. Crews are still hauling wreckage from the tracks. They expect to be there until noon on Wednesday.