UPDATE: Former RMG Foundry goes up in flames in Mishawaka 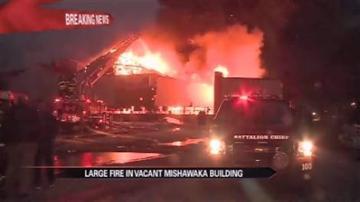 Mishawaka firefighters were called to the old factory, turned warehouse just before 5:30 p.m.

When firefighters arrived heavy smoke was pour out of the rooftop. Within several minutes, the flames shot hundreds of feet in the air and the roof gave way and collapsed.

Inside, underneath the burning rubble, were several cars, RVs and boats. Fire officials say the warehouse was housed anywhere from 175 to 200 boats for a local marina along with other vehicles.

Firefighters say it was propane tanks and fuel tanks from these vehicles that ignited several small explosions while the blaze burned through the south side of the warehouse.

Officials reported no injuries during the blaze. One employee was reportedly inside the building at the time, but was not near the fire and was able to get out safely.

Firefighters are expected to work throughout the night, roughly the next 10 to 12 hours, to put the fire out completely. Chief Freeman, says once the fire is under control, firefighters will spend the next few days putting out hot spots.

So far, firefighters say they haven't been able to identify exactly where the fire started or any possible causes.

Fire officials say the investigation into the cause of the fire will begin once it is safe for investigators to enter the facility again.