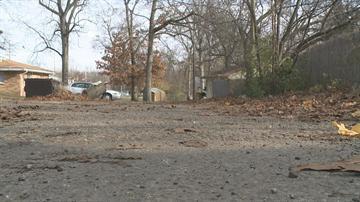 SOUTH BEND, Ind. – Dietrich Perkins was ambushed in an alleyway that leads to the apartments near the intersection of Lathrop and Johnson on Friday night.

"We just heard gunfire and there was a lot of it, it was more than fifteen shots," Claude Slade said. He lives in one of the apartments and it also the property manager there.

Slade said the gunfire began at the far end of the alley, “It started in the back and it end up down this way.”

Perkins did not live in the nearby apartments, but he visited often. Neighbors say he had plans to meet people in the alley that night, when he got of the car bullets started to fly.

“I didn’t hear no arguing, just gunfire,” farther down the alley way Deeante Greer said the shots broke out just before 8 p.m. right outside of his apartment.

Greer said the first round of shots was loud, one pop right after the other, “It started close at first and then it started fading like the shooter was moving.”

People said they heard two guns firing at the same time; Perkins was shot at least ten times, hit in both the head and chest. The 31-year-old died in the alleyway, after he was gunned down, lifeless on the pavement neighbors say it was quite for a just a few seconds.

Then, the gunmen then took aim at a woman in the driver seat of a black sedan, the woman who has not been identified drove Perkins to the alley; she saw the whole thing happen.

The woman tried to escape the shooters; she headed out of the alley toward Johnson Street. The gunmen chased her shooting at the car until she crashed into a light pole.

“I didn’t see the car; I was too scared to look,” Slade said he was still on the floor, taking cover when he heard the car crash.

The woman and the car stayed there until police arrived, but before the sirens started, Slade said he heard another car speed out of the alley.

“You just heard the car squeal off,” Slade said.

The South Bend Police Department and the St. Joseph County Homicide Unit are investigating, but have no suspects at this time.

Police are trying to get more information from the woman who was driving the black sedan. Officers said she is lucky to be alive, the car was hit with more than a dozen bullets but the woman only sustained minor injuries in the crash.

Many of the people who live in the apartments recognized Perkins, but did not know him well. Slade said he does not know why, but the gunmen obviously wanted to kill Perkins and he must have been targeted.