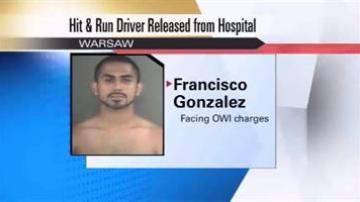 WARSAW, Ind. -- A Warsaw man was taken into custody after police say he hit a horse-drawn buggy then took off from the scene.

Police responded to a call right before 11 p.m. Saturday on Shelden Street, north of the Warsaw Super Wal-Mart. They tell ABC57 News a car hit a wagon and the horse died on the scene. Five juvenile Amish males were ejected from the buggy and suffered minor injuries.

The teens all advised that they were traveling south toward Wal-Mart on Shelden Street when they observed a white 1993 Chevrolet Lumina pass them, then drove down to the Wal-Mart lot and make a U-turn.

The vehicle then travelled back north, swerved over into their lane and struck the horse and buggy head-on. The horse landed on the hood of the car and then fell to the pavement as the car backed up and fled the scene.

Warsaw Police located the vehicle near U.S. 30 at 200 West where the driver was attempting to restart the heavily damaged car to continue fleeing.

The driver, 24-year-old Francisco Gonzalez, had minor bleeding to his head, but was also covered in blood from the horse. He was transported by EMS to a Fort Wayne hospital where a search warrant for alcohol testing was performed.Gonzalez was released before he could be taken into custody. He had a blood-alcohol level of .17.

Charges being filed on Gonzalez include failure to stop after a vehicle accident, operating while intoxicated, and operating a vehicle while per se intoxicated. Additional charges may be sought once the investigation is complete.

The investigation is still ongoing by Warsaw Police Department and the Kosciusko County Prosecutor’s Office.