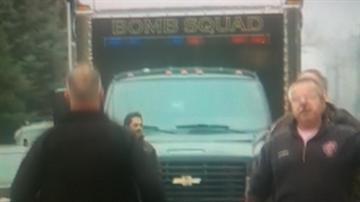 MISHAWAKA, Ind. -- A Mishawaka neighborhood was evacuated again Thursday morning so the bomb squad can continue to remove and destroy a large amount of explosives and volatile substances found on the five-acre property where a man committed suicide by blowing himself up.

Currant road will be blocked off, between Early and Willow Creek for an uknown time period.

The area will remain evacuated all day, as the bomb squad is expected to be on the scene through the afternoon, and possibly into the evening.

Officers say the investigation is ongoing, and detectives are expected to perform a fingerprint analysis Thursday to confirm the body is that of Stanley Warren. Detectives said Wednesday the body cannot be positively identified visually, but they did not believe foul play was involved.

Dozens of cars continued down Currant Rd. despite the signs, and were forced to make a u-turn at Willow Creek. Officers are advising drivers to take a different route Thursday.

A 65-year-old Vietnam veteran, Stanley W. Warren, committed suicide by blowing himself up. He lived 55527 Currant Road in Mishawaka.

Police were asked to check on Warren's welfare by his concerned brother who had not seen him in several days. When police arrived on the scene, they discovered that Warren had used an explosive device to kill himself.

Police say they found more explosives on his property and inside Warren's home. The bomb squad was on the scene for several hours Wednesday. County police evacuated the neighborhood between Early and Willow Creek.

St. Joseph County Police had shut down Currant Road completely from Day to McKinley; they later allowed evacuated residents to return to their homes for the night.

Only residents of homes between Early and Willow Creek were allowed into the area. They were instructed to be out of the area no later than 8 a.m. on Thursday so bomb technicians could finish removing and destroying explosive materials found in the home.

Bomb squads from South Bend and Elkhart found a lot of explosive materials in Warren's home, according to police. Some of the material was extremely dangerous and could be set off with as little as a spark from static electricity.

Police say a suicide note was found at the scene and they do not believe Warren had any intentions of harming anyone but himself. Warren had experience working with pyrotechnics, according to his brother.

Warren was said to have used his knowledge and skills to create fireworks shows and other explosive displays. Some neighbors say they heard a loud explosion Monday, and several say they felt it shake their home.

Neighbors say that Mr. Warren's home was recently sold at a tax sale. ABC 57 News checked with the St. Joseph County Auditor's office. This is not true. However, he did have a quarrel with the county over his property taxes this past spring.

Several deductions had dropped off of his account after Mr. Warren's wife passed away, which tripled his tax bill.

The taxes went unpaid and were delinquent for some time. Mr. Warren took the matter up with the county, who who eventually corrected the tax bill. Mr. Warren did eventually pay his tax bill. The property taxes on the home are current.

Warren was a long-time member of the Mishawaka VFW post #360 on Jefferson Blvd. He became a lifetime member in 1993.