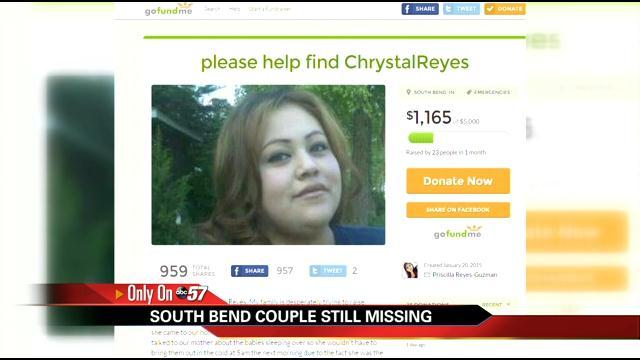 Crystal Reyes has been missing for over two months along with her boyfriend Nick Sams. The couple was last seen on South Bend's west side near Pleasant Street on December 27th. ABC 57 news sat down with Reyes' mother Dora Gonzalez, who says there is no way her daughter and Sams just ran away together.

She says now, as a grandmother, she is having a difficult time telling her grandchildren over and over the same story line.

"What do we tell them? We can't keep lying, we keep saying she is at work," said Gonzalez.

Reyes' two children ask for her almost every night.

Gonzalez is certain that her daughter wouldn't just up and leave.

She didn't want to go into detail, but says she is working on her own to discover what happened.

"It's kind of like a soap opera you would say," said Gonzalez.

In addition to the other resources she is in contact with, the family has also set up a Go Fund Me account to help pay for a private investigator.

There is a $2,000 reward for anyone who can provide information on where these two may be.

If you have any information on their whereabouts, contact the South Bend police department at 574-235-9201.