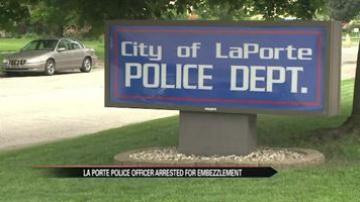 LAPORTE, Ind. -- A La Porte Police officer is facing jail time for allegedly stealing thousands of dollars from the Fraternal Order of Police.

He has resigned his position in the police department.

Bishop served as treasurer to the La Porte Fraternal Order of Police and is accused of using FOP money for personal expenses like hotels, restaurants, bars, Cubs tickets and a trip to a casino.

If convicted, Bishop could face between 6 months to five years in prison.

We reached out to  the President of the La Porte FOP and the Mayor of La Porte to get their reaction to the news and have not heard back.

On 4/14/14 Chief Adam Klimczak met with F.O.P President Robert Metcalf and the F.O.P. Board of Trustees in regards to an alleged theft by a lodge member that they had discovered.  The F.O.P Leadership reported that Mark Bishop had been using the F.O.P. funds for personal reasons and that several thousand dollars was unaccounted for. After this meeting Chief Klimczak met with Officer Mark Bishop who resigned his position with the LaPorte City Police Department.  Chief Klimczak ordered the Criminal Investigation of this matter turned over to the Indiana State Police.  Chief Klimczak stated ‘’that in cases where criminal activity by a member of this agency is alleged, it is Standard Operating Procedure to turn that Investigation over to the Indiana State Police.This allows total transparency throughout the investigative process and allows for a complete investigation from an outside agency.”  Chief Klimczak added “that the department as a whole was very disappointed in the decisions made by one of our own.  It is our hope that the outcome of this unfortunate incident will serve as a reminder that no one is above the laws that the members of this department have sworn to enforce.”