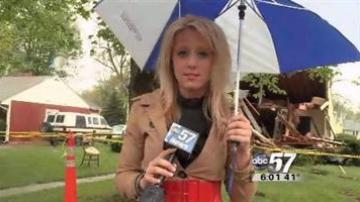 SOUTH BEND, Ind. -- Police have released the name of a woman who was killed on Friday morning when a car plowed into her South Bend home.

Police said that the 57-year-old victim's name was Barbara Knapp. She lived alone in a home at 825 N. Twykenham Dr. with two dogs. One dog is also dead. The second dog was found by police, cowering under a bed, but alive. The dog has been released into the care of Knapp's son.

Two other people, who were in the car with McCaffery, were taken to the hospital. Both had non-serious injuries.

Police are still trying to piece together information to figure out what happened. Witnesses said that two cars came flying down Corby when one lost control and then slammed into the living room of the home, killing Knapp.

Police are investigating the the possibility of drag racing being involved.

Crews were out at the scene on Friday around 9:30 a.m., demolishing part of the living room of the home. Early next week, crews will return to demolish the rest of the home. In the meantime, Knapp's family will be stopping by to remove her belongings.

We will continue to bring you updates on the air and online as it becomes available.