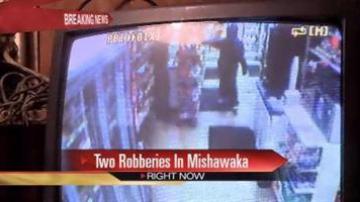 Police were first called to the Mr. Fresh convenience store at the corner of Jefferson Boulevard and Clay Street around 6:45 p.m.

Just 25 minutes later, police received another report of an armed robbery. This time, just blocks away, at the Studio Plus Hotel on North Main Street near Edison Lake Parkway.

Although police are not saying whether the two armed robberies are connected, it appears they could be.

Both the employees robbed at gunpoint gave almost identical descriptions of the robber.

Employees at both locations told ABC 57 News a man dressed in all black, with his hoodie up and a black scarf covering the lower half of his face, walked in with a gun and demanded money.

The cashier at Mr. Fresh said it was a scary moment as he argued back and forth with the robber about whether he had access to the store's safe.

When the robber realized there was no way to get in the safe, he quickly fled. Police searched the area around both locations, but were unable to apprehend the suspect.

No one was injured in the armed robberies.