UPDATE: Pump at ethanol plant turned on to help nearby residents 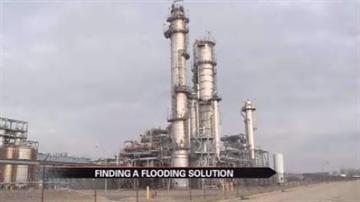 Mayor Pete Buttigieg announced Friday that the city has taken action to help the homeowners whose houses flooded after the ethanol plant closed down.

"I pray everyday for a solution, for good news," said Graciela Gomez.

This mother's prayers have finally been answered. Since November her entire basement has been under several inches of standing water. Now she hopes that will change.
On Friday afternoon, the city turned one water pump back on at the New Energy ethanol plant in order to keep excess water out of residents' homes.
"Our public works folks have created a way for the water to be pumped out, but then collected and channeled out through the city's waste water system," said Buttigieg.
Officials say the single pump will remove four million gallons of water from the ground every day. When the plant was still operating, it pumped six million gallons of water out each day and city officials like councilman Oliver Davis hope this will make a huge difference for homeowners in the area.
"We needed a band aid to slow down the water. With the snow coming this weekend, with the previous rain we've had and with the cry we have had from the neighbors the city had to do something," said Davis.
Davis says he is very pleased with the mayor's decision. However, he says, this problem is far from fixed. Davis says the city is waiting to see what happens at New Energy's next bankruptcy court hearing.
He says if a liquidator comes in and removes the plant then everything will go, including the pumps.
"It would then really crush the situation right now. The ability for us to turn on the pumps right now is only there because of the fact that nothing has been finalized."
That is why finding a permanent solution is vital, but the mayor said doing so will take both time and money.
"For us to keep this up we are going to have to approach the council to make sure we have the resources we need," said Mayor Buttigieg.
Although it may take a few days for residents like Gomez to see a difference, she says she is happy just knowing things will get better soon.
Davis said, it will cost the city about $10,000 a month to keep the one water pump on. So far, the city has not said how long it plans to keep the pump running.
Share this article: