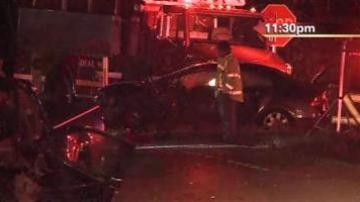 NORTH LIBERTY, Ind. -- Deputies said a drunk driver is to blame for a deadly overnight crash in North Liberty.

It happened around 10:30 p.m.Thursday on State Road 23 near Lath Trail. Investigators said 54-year-old Randolph Brown of Rolling Prairie man was driving a pick-up truck northbound when he crossed the center line and slammed into another car traveling southbound. Police later pronounced him dead at the scene.

The driver of the passenger vehicle was 24-year-old Brittany Ruggles from North Liberty, a corrections officer with the St. Joseph County Police Department, who just completed her shift in the jail.

Fire crews had to extricate both drivers from their vehicles. MedFlight was also dispatched to the scene, however, wasn't utilized after the man passed away. Ruggles suffered non-life threatening injuries to her elbow and knee and was transported to Memorial Hospital for treatment.

Police believe alcohol was in the pick-up driver's system. The Fatal Alcohol Crash Team was dispatched to the scene to further investigate the crash due to alcohol believing to be a factor.