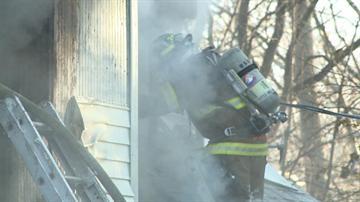 BERRIEN SPRINGS, Mich. - A three-year-old is dead, three others are injured and seven escaped from a ferocious apartment fire in Berrien Springs Tuesday morning. The fire consumed a home that had been converted into apartments on Valley View Drive, not far from the Andrews University campus, just before 6:30 a.m.

Michigan State Police Investigators were at the scene till about 5:00 p.m. Tuesday night and will continue the investigation Wednesday morning. Chief of Berrien Springs/Oranoko Township Police Milton Agay said there is no evidence of foul play but it was unusual how fast this fire became unmanageable.
According to witnesses, as soon as the building caught fire this morning it was engulfed in flames. "When I opened my eyes I felt the house shaking. Something was going on people were screaming," said Daniel, a downstairs tenant of the apartments. Daniel did not want to share his last name for this story. Daniel said he woke up and escaped the fire by a few minutes.
The commotion startled neighbors. "We woke up to screams and glass shattering," said Rhodel Kabah, a next door neighbor. "Like blood curdling screams," she said. Kabah said the screams were from 25-year-old Jessica Haas. Kabah said Haas realized her three-year-old daughter, Rockelle Haas, wasn't going to make it out alive.
Kabah’s eyes went watery remembering the incident. "(She realized) it's too late and the mom was on her knees just screaming to her little girl. Her infant got out and the neighbors got out but I don't think she (Rockelle) got out."
Agay said Jessica Haas, her husband 47-year old Robert Haas and their two children three-year old Rockelle Haas and infant son Jacob Haas lived upstairs. The adults and infant were able to get out the burning building by jumping from a second story window. There were attempts to save the three-year-old, but it was too late. Firefighters found her body almost five hours later.
According to police every time someone dies there is a death investigation. Tuesday the investigation was centered on what caused the fire and how the girl died. Fire officials also question whether the home was equipped with smoke detectors. “It’s unusual for a fire to get that large if a house has smoke detectors. That’s one of the things I’m investigating and that we’ll be looking to determine,” said Bruce Stover with the Berrien Springs/Oronoko Township Fire Department.
Three dogs and two cats also perished in the fire.
As of Tuesday night Jessica had been released from Lakeland Hospital in Saint Joseph and Robert was still in Bronson Hospital’s burn unit in Kalamazoo. Robert is said to have the most severe burns and may have broken his feet or ankles from the jump from the second story.
Share this article: