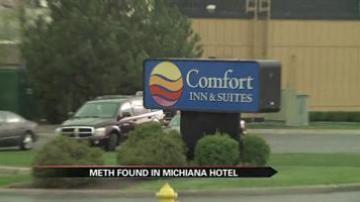 It happened at the Comfort Inn on Kosciusko and Center Street in Warsaw.

The hotel manager said a couple checked in around 11 Thursday night. When it was time to check out Friday there was no answer at their door. That’s when the hotel called police.

When police arrived, they were able to wake one of the occupants and he opened the door.

Once inside, officers located an active one-pot methamphetamine lab, precursors to the manufacture of meth, syringes, and finished methamphetamine product, according to police.

In addition to fires, he said chemicals found in the drug pose a danger to anyone in close quarters.

“The process of making meth does have a lot of different gases that it produces that are really harmful to people," said Carroll.

Carroll said toxic fumes can be found even once the meth has been removed.

“The fumes do have a tendency to embed themselves in furniture and walls," said Carroll.

The hotel has quarantined the room involved but the rest of the hotel is open.

The hotel manager said there was no reason to suspect that couple of wrongdoing. He said this is the first time this has happened at his hotel.

Richard D. Cain, 33, was taken into custody and booked in the Kosciusko County Jail on a B felony charge of dealing, delivering, or manufacturing methamphetamine. He is being held on a $100,000 bond.

Courtney C. Bowling, 24, was arrested and charged with possession of over 3 grams of methamphetamine and possession of stolen property. She is being held on $25,000 bond.

The car the couple drove to the hotel had a stolen license plate on it, police said.