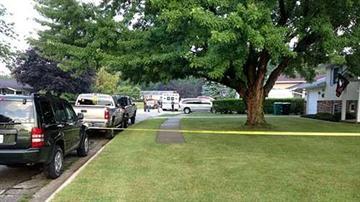 "Police received a call about 7:12 this morning to the address you see you over here that's roped off, 713 Thunderbird," said Commander Tim Corbett of the Metro Homicide Unit.

When police arrived, they found two people inside of the home dead near the bathroom.

"A white female and white male were found deceased inside. We are investigating this as a murder suicide at this time," said Corbett. "There's no one running around with weapons or anything like that."

There were two children inside the home at the time of the incident. They are 9-years-old and 14-years-old.

"Two young juveniles were taken down to our office right now to be interviewed and that's where the investigation is at right now. It's going to be ongoing for quite some time," said Corbett. "The kids will be going to down to our office like I said and then we will be contacting relatives to make sure that they are secure."

Neighbors said Michelle was a mortgage lender and she and Andrew were going through a divorce. A quick search on line shows she worked at the Wells Fargo office in Mishawaka on Lincolnway East as a home mortage consulant. ABC 57 News called the Wells Fargo number listed for Michelle's office and her voicemail stated she was on vacation for 10 days and would be returning to the office on August 5th, which was yesterday.

"She was a mortgage lender at Wells Fargo Bank," said Dana Ross.

Ross' stepson Connor knew the girls who survived the shooting.

"I've seen the kids walking towards the bus stop. When I saw them take the kids out of the house, everyone just seemed really upset," said Connor Ginter.

An online search of the couple's names shows a wedding announcement that was published in the newspaper in July of 2006 stating the couple was married on May 9, 2006 in Las Vegas. It states both Michelle and Drew graduated from New Prairie High School.