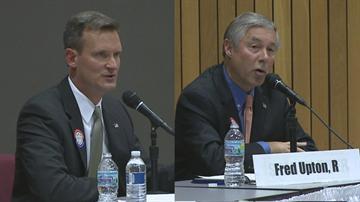 BUCHANAN, Michigan – Congressman Fred Upton took on his democratic challenger Mike O’Brien Tuesday night in what is turning out to be a close election for Michigan’s 6th congressional district.

The final debate between the two candidates was held in front of a packed crowd at AEP headquarters in Buchanan.

Both candidates were asked several questions ranging from the military defense spending to social issues like gay marriage and abortion. Both agreed, however, that the most important issues for Southwest Michigan this election is the economy and jobs.

A theme throughout the night was O’Brien attacking Upton’s policies and Upton defending his record.

When asked about creating jobs and the economy, O’Brien said that Upton has supported tax incentives that send jobs overseas. “We need to reverse those incentives and actually incent companies to return that equipment and those jobs back over here,” he said.

Upton responded to O’Brien’s comments by saying that he played a big part in saving Detroit and ancillary jobs in the southwest region of the state. “I was the republican lead in putting together the package that actually saved the auto industry,” Upton argued.

On healthcare, Upton bashed Obamacare by saying that health reform needs bipartisan support. “The only bipartisan part about it was there was bipartisan objection,” Upton said.

Responding the health care question, Obrien argued that Upton and congress have failed to come up with any other ideas. “Not one single recommended fix,” Obrien said.

When asked about ‘Washington gridlock’ between democrats and republicans, Upton said that he has a history with reaching across the isle but O’Brien rebutted that Upton is out of touch with his constituents. .

“I think its imperative (that) we work together and it’ll be part of that process,” said Upton.

“Our congress is populated by career politicians that have never been out of Washington and that’s the problem,” said O’Brien.