US appeals for calm as allies clash in Iraq 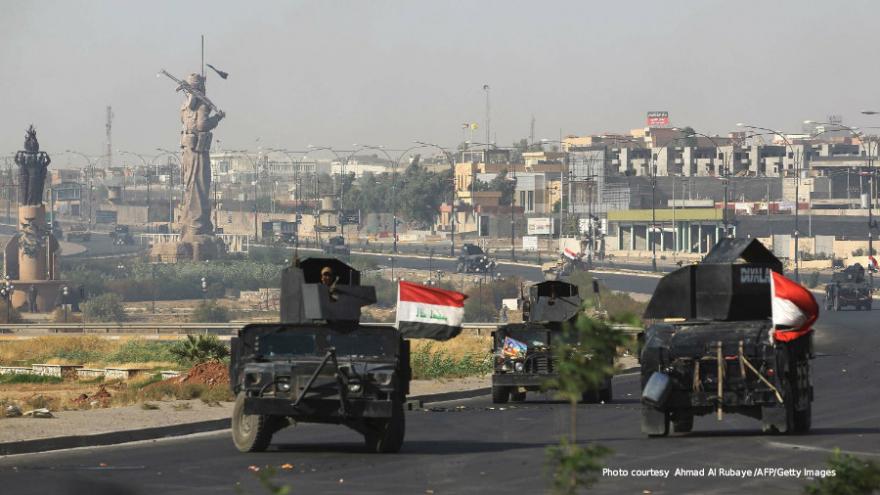 (CNN) -- The United States has made an urgent call for calm in northern Iraq as Kurdish fighters and Iraqi forces -- two of Washington's key allies in the region -- clash over disputed territory.

Iraqi forces seized the coveted oil-rich city of Kirkuk on Monday after three years under Kurdish control. The Kurds took control of the city after Iraqi government forces abandoned it during ISIS' lightning offensive in 2014.

Iraqi Prime Minister Haider al-Abadi made clear his forces would eventually come back for Kirkuk, and he ordered the operation to "secure" it Sunday, weeks after the Kurds held an independence referendum claiming the disputed city as their own.

An estimated 61,200 people were displaced around Kirkuk the past two days, according to the United Nations Office for the Coordination of Humanitarian Affairs.

Emergency food rations and other aid is being provided to families sheltering in public spaces, the office said in a statement Tuesday.

"Authorities have confirmed that the majority of displaced families from Kirkuk are already returning to their homes in Kirkuk city," said Lise Grande, UN humanitarian coordinator for Iraq. "Most of the families who are still displaced are staying with families and host communities."

"We call on all parties to do everything possible to shield and protect all civilians impacted by the current situation," she said.

Massoud Barzani, president of the Kurdish Regional Government in Iraq, issued a statement saying that the events in Kirkuk were the work of "a few people in Kurdish politics and the government of Baghdad. As a result, Peshmerga were ordered to pull back."

In another version of the statement posted on Barzani's English-language website, he said, "Some people from a certain political party had unilaterally paved the way for such an attack, whose result was the withdrawal of the Peshmerga forces from Kirkuk."

A dilemma for US

President Donald Trump insisted Washington would not take sides in the dispute.

"We don't like the fact that they're clashing. We're not taking sides," Trump told reporters at the White House. "We've had for many years a very good relationship with the Kurds as you know, and we've also been on the side of Iraq, even though we should have never been there in the first place."

Asked who controls Kirkuk, a spokesman for the US-led coalition, Col. Ryan Dillon, said that was a question for the Iraqi government and the coalition's focus is fighting ISIS.

"We don't have advisers and people on the ground with the Iraqi security force or the Peshmerga elements that are in and around Kirkuk," Dillon said.

Meanwhile, Germany was in talks with the coalition after temporarily suspending its efforts to train the Peshmerga. The Federal Ministry of Defense said it will "make a situation-based decision whether to resume training," a spokesman said.

The operation puts the United States in a dilemma and highlights the complexities of the fight against ISIS: Washington arms and supports both the Iraqi forces and Kurdish fighters. It also raises the long-unanswered questions of how territory might eventually be divided along ethnic lines if ISIS is finally defeated.

The State Department called for calm.

"The United States is very concerned by reports of violence around Kirkuk, Iraq. We are monitoring the situation closely and call on all parties to coordinate military activities and restore calm," spokeswoman Heather Nauert said in a statement.

The United States is trying to get its allies in Iraq to stay focused on ISIS, but as the extremist group is now close to defeat in the country, both sides are concerned about where lines will be drawn over territory formerly held by the group.

"We strongly urge all parties to avoid provocations that can be exploited by Iraq's enemies who are interested in fueling ethnic and sectarian conflict," Nauert said. "In particular, we note that there is still much work to be done to defeat ISIS in Iraq, and continued tensions between Iraqi and Kurdish forces distract from this vital mission. The United States will continue to stand with our Iraqi partners to ensure ISIS' defeat."

The Iraqi operation began Sunday with forces seizing key assets, including the Baba Karkar oil and gas field and the K1 military base, Iraqi counterterrorism spokesman Sabah al-Noman told CNN. By Monday, Iraqi forces had seized the entire city and set up checkpoints on its perimeter.

Hundreds of Kurdish families fled Kirkuk on Monday, while video footage from inside the city showed other residents celebrating with Iraqi flags.

There were also reports of a split between Kurdish factions. The Peshmerga General Command accused members of the Patriotic Union of Kurdistan, a political party within the Kurdistan region, of abandoning their posts as Iraqi forces entered in what it called a betrayal.

The Kurdistan region and the greater Kirkuk province have an estimated 15% to 25% of Iraq's oil reserves, with several key oil fields surrounding the city of Kirkuk. Iraq has one of the world's largest known oil reserves.

Kirkuk was historically a Kurdish-majority town, but during the rule of Saddam Hussein, the ousted dictator moved Arab families in and Kurdish families out to change the area's ethnography, under a policy termed "Arabization." It's also home to Sunni Arabs and Turkmen.

While Baghdad has long said it would not let Kirkuk fall permanently into Kurdish hands, Kurdish fighters have led key offensives against ISIS. They will likely look for a deal with Baghdad in return for not opposing the Iraqi operation to retake control.

Iraqi forces fled Kirkuk in 2014 as ISIS fighters attempted to secure the territory shortly after they took over the city of Mosul and established their so-called Islamic caliphate across the north of the country. The Kurds sent in their fighters and claimed the city.

Extremists, including al Qaeda in Iraq, have launched major attacks on Kirkuk over the past decade, targeting mostly security forces there.

After the fall of Hussein, Kurds began returning to Kirkuk, repopulating the city and its surrounding areas.