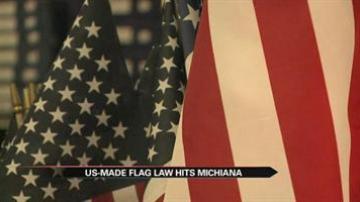 Not every American flag is made in America but a new law bans foreign made United States flags.

Many times those flags are made in China.

"I think it helps show support for the workers in the U.S. and the support of the U.S. economy rather than have dollars go overseas I think there's symbolism there's also," said Bolinger.

With the law, all flags would need to be 100 percent American made. This includes ink and fabric used to make it.

Bolinger says American made flags are usually better quality and it is always good to help small business owners.