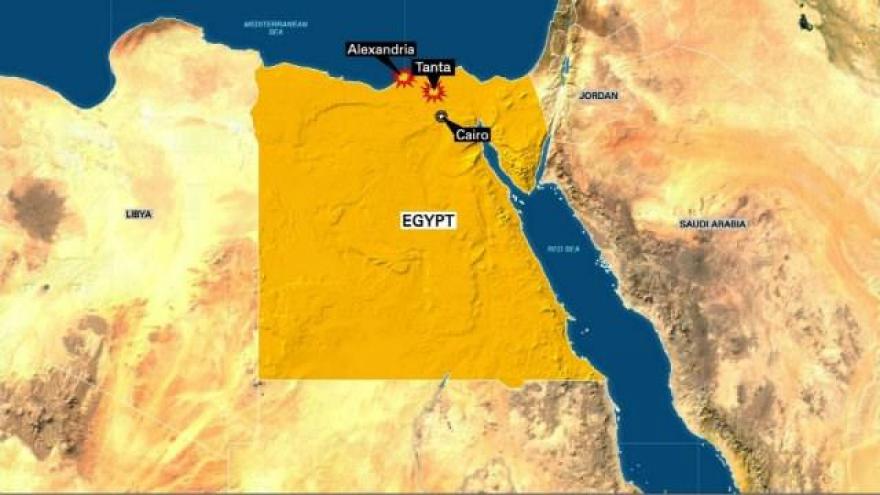 (CNN) -- The US has decided to deny Egypt almost $100 million in aid and hold back another $195 million until it sees improvements in Cairo's track record on human rights and democracy.

The Trump administration is looking to strike a balance between acknowledging Egypt's importance as a strategic partner and frustration with passage of a new NGO law it sees as curbing democracy and freedoms.

"We have serious concerns regarding human rights and governance in Egypt," an administration official said. "At the same time, strengthened security cooperation is important to US national security."

Washington has given Cairo nearly $80 billion in military and economic assistance over the past 30 years and will continue to support Egypt in defeating extremists, fighting terrorism and bolstering its economy, the official said.

Washington is central both to Middle East peace efforts, a priority for the President, and to resolving an ongoing dispute between Washington's Gulf allies, which US officials worry could hamper the fight against ISIS.

The funding decision, first reported by Reuters, comes as President Donald Trump's son-in-law and senior adviser Jared Kushner is set to arrive in Egypt Friday as part of a Mideast trip focused on Israeli-Palestinian peace efforts and on resolving the spat between Qatar on one hand and Egypt, Saudi Arabia, the United Arab Emirates and Bahrain on the other.

The move against Egypt marks another notable turn in Trump's foreign policy stance, given that his administration made clear early that human rights were not going to be given primacy over economic or strategic interests.

That changed when the administration felt "blindsided" by Egypt's decision to move forward in May with a law that restricts nongovernmental organizations to development and social work, an administration official told CNN. Members of groups that do anything else, including democracy development, face up to five years in jail under the law.

Trump approved the decision to withhold aid earlier this month, and Secretary of State Rex Tillerson signed off within the last week, the official said.

Assurances at the highest levels

During Egyptian President Abdel Fattah al-Sisi's April visit to the White House, members of the delegation "at the highest levels" had assured the White House the law would not be passed, the administration official said.

The decision to deny Egypt aid is the administration's response.

Tillerson has directed that that funding will now be held in reserve "until we see progress from Egypt on key priorities," the official said. "We remain concerned about Egypt's lack of progress in key areas, including human rights and the new NGO law," the official said.

As a result, Washington will also redirect another $65.7 million in Foreign Military Financing and $30 million in Economic Support Funds that had been meant for Egypt and give them, instead, to "other key security partners."

The official said it hadn't been decided which partners would get the funds, but stressed that the move won't undermine Cairo's security.

It's a sharp change from earlier this year, when both Trump and Tillerson said that national and economic interests should often take priority.

Earlier that month, Tillerson had told State Department employees that "if we condition too heavily that others must adopt this value that we've come to over a long history of our own, it really creates obstacles to our ability to advance our national security interests, our economic interests."

Groups such as Amnesty International have documented widespread repression and human rights abuses, including torture, by the Egyptian security forces and an effort by the government to quell dissent.

Tillerson has directed that the frozen $195 million in military aid can be accessed "at any time," provided Egypt makes progress, the official said. Asked whether it would be enough for Egypt to reverse the NGO law, the official said, "I don't know what it will take. We'll know it when we see it."

The Egyptian Embassy did not return calls for comment.