US commander: New troops to Afghanistan in 'days or weeks' 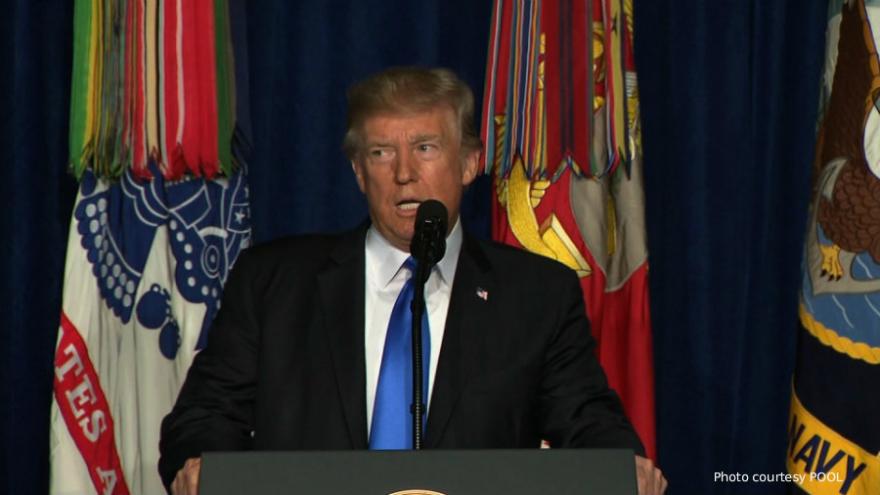 (CNN) -- New US troops could arrive in Afghanistan in a matter of "days or weeks," the top US commander in the Middle East told reporters on Tuesday, just hours after President Donald Trump unveiled his administration's strategy for a war that has lasted almost 16 years and claimed more than 2,000 American lives.

Trump authorized more troops and declared that the US will avoid nation-building during his first primetime address to the nation on Monday -- concentrating instead on empowering the Afghans to fight their own battles.

His speech sought to convince the country that he was applying a different strategy to the enduring Afghan conflict, in which US troops are now primarily serving in noncombat supporting roles and casualties have dropped dramatically when compared to previous years.

However, the President offered no indication of how many thousands more US soldiers would be deployed, nor would he discuss troop levels or further plans for military activities, echoing a promise he made on the campaign trail.

Trump's top commander in the region, Army Gen. Joseph Votel, on Tuesday provided some context related to the timing of any additional troop deployments.

Votel's comments were first reported by the Associated Press and later confirmed to CNN by a spokesman for US Central Command, which oversees US troops in the region.

"That would be the earliest that some may start to arrive in Afghanistan," US Air Force Col. John Thomas told CNN on Tuesday. "They will flow in as needed. But the goal is to have an effect on this fighting season."

The fighting season refers to the warmer months in Afghanistan, a period when the Taliban typically conduct more attacks and offensives due to their ability to more easily cross the mountainous border with Pakistan.

Votel's comments come after Secretary of State Rex Tillerson explained that Trump's newly unveiled Afghanistan strategy is meant to pressure the Taliban to the negotiating table by making clear there's no way to win on the battlefield.

"We are there to facilitate and ensure that there is a pathway for reconciliation and peace talks," Tillerson said. "As the pressure begins to take hold, we believe we already know there are certain moderate elements of the Taliban who we think will be ready and develop a way forward."

Trump's South Asia plan is meant to force the Taliban to accept that they "will not win a battlefield victory," Tillerson said. Addressing the terrorist group directly, he said, "We may not win one, but neither will you."

He cautioned that the effort will take time. "It is time to begin a process, a lengthy process, of reconciliation and a peace accord in Afghanistan," he said. "How long that will take will be based on conditions on the ground."

Military leaders have long sought an enduring presence in Afghanistan based on battlefield conditions rather than an arbitrary withdrawal timeline -- seeing it as a critical component of any strategy that aims to drive the Taliban to the negotiating table and compel meaningful cooperation from Pakistan.

Tillerson declined to offer many more details beyond what the President had.

"We're not going to signal an increase, decrease, timing, any of that," he added, referring to troop levels, among other things. "It will be driven by conditions on the ground."

He added, though, that "the intent is there will be visibility to troop levels once the decision has been made."

"The only way we can defeat an enemy that is as nimble and as cagey, tactically, as this enemy is, we have to be as cagey and tactical as they are," Tillerson said. "And we've not been fighting that way."

Secretary of Defense James Mattis also declined to offer a specific number when asked about the increase in troop levels on Tuesday, telling reporters he will wait for a plan from the chairman of the Joint Chiefs of Staff before commenting further.

"Let me look at the plan that the military brings me," Mattis said. "Once I see that, (I'll) look at the number we have on the ground, reorganize those on the ground to align with the new strategy, and then bring in whatever gap-fillers I need."

Senior administration officials said the President had agreed to increase troop levels, but noted that Trump delegated the authority to manage troop levels to Mattis in June.

About 8,400 US troops are currently deployed to Afghanistan. The majority of them -- about 6,900 -- are assigned to the NATO mission to train and advise Afghan security forces alongside approximately 6,000 troops from other NATO countries. The remainder of US forces in Afghanistan carry out counterterrorism missions in the country.

The US officially ended its combat mission in Afghanistan in December 2014 and shifted its mission to focus on counterterrorism operations and training Afghan forces. But President Barack Obama never managed to achieve the complete withdrawal of US forces that he had sought during his time in office.