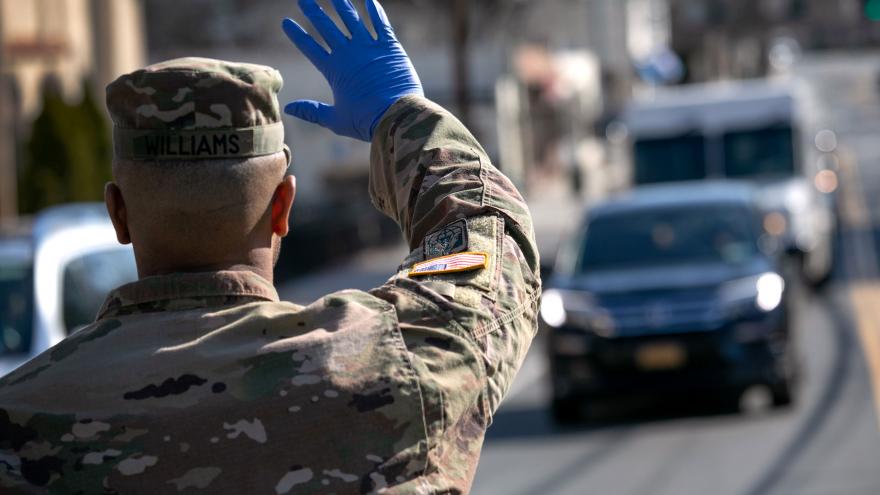 (CNN) -- Monday was the deadliest day in the United States' fight against the Covid-19 disease caused by the coronavirus with more than 100 new deaths reported.

And Monday saw more governors taking actions such as restricting group sizes, closing bars and restaurants, and in the case of Texas, restricting medical procedures including abortions.

Texas Attorney General Ken Paxton said Gov. Greg Abbott's order to postpone "all surgeries and procedures that are not immediately medically necessary" includes abortions that are not needed to preserve the life or health of the mother.

"We must work together as Texans to stop the spread of Covid-19 and ensure that our health care professionals and facilities have all the resources they need to fight the virus at this time," Paxton said. "No one is exempt from the governor's executive order on medically unnecessary surgeries and procedures, including abortion providers."

New measures were taken in more than a dozen states.

Florida Gov. Ron DeSantis, who said his state has seen an influx of people flying in from Connecticut, New Jersey and New York, said anyone coming from those states will be told to self-quarantine for 14 days.

"Today there's over 190 direct flights from the New York City area to the state of Florida, and I would reckon, given the outbreak there, that every single flight has somebody on it who's positive for Covid-19," DeSantis said.

More than 42,000 people in the United States have been infected with coronavirus, and at least 515 people have died.

At least 15 states have issued stay-at-home orders that are either in effect or will take effect this week. More than 137 million Americans live in states that will have those new rules in place by Wednesday.

And in other states, mayors in cities such as Denver and San Antonio are putting in place similar orders.

"I want America to understand -- this week, it's going to get bad," US Surgeon General Jerome Adams told NBC's "Today" show Monday.

"We really, really need everyone to stay at home. I think that there are a lot of people who are doing the right things, but ... we're finding out a lot of people think this can't happen to them."

President Trump acknowledged the effects of coronavirus are likely to worsen.

"Certainly this is going to be bad," Trump said, agreeing with the surgeon general.

"We're trying to make it much much less bad," Trump added. "Obviously the numbers are going to increase with time and then they're going to decrease."

Americans should stay at least 6 feet away from others and avoid crowds, health officials say. Yet people keep ignoring that guidance.

Sun worshipers have been flocking to beaches. Young people have been gathering at parks as many schools are now closed.

So more states are enacting strict stay-at-home orders. California, Illinois, New York and New Jersey were already practicing them over the weekend.

Connecticut, Louisiana and Washington joined that list Monday as did seven counties in Pennsylvania.

Vermont Gov. Phil Scott directed businesses and not-for-profit entities -- to the maximum extent possible -- to put into place telecommuting or work-from-home procedures. He told Vermonters to be ready for an upcoming announcement on further restrictions and a stay-at-home directive.

The orders say residents must stay home, with few exceptions such as grocery shopping, getting medicine and going to work at an essential job.

People can still go outside and be active, as long as they stay at a healthy distance from others.

Violating the orders could result in fines in states such as New York and Connecticut.

"There will be a civil fine and mandatory closure for any business that is not in compliance," New York Gov. Andrew Cuomo said.

Maryland Gov. Larry Hogan ordered the closure of all non-critical workplaces as of 5 p.m. Monday.

Massachusetts Gov. Charlie Baker also ordered all nonessential businesses to shut down their physical workplaces from noon Tuesday until April 7. Those employees can still work from home.

As in many other states, restaurants and bars can still sell food, but only as takeout.

Massachusetts is also banning gatherings over 10 people "a reduction from the 25-person limit established in an earlier order," Baker's office said.

Indiana, Michigan and West Virginia joined a growing number of states ordering people to stay home, with a few exceptions.

The President has activated the US National Guard in three of the hardest-hit states -- California, Washington and New York. Almost half of all US cases are in New York state.

Trump said those National Guard units will remain in the command of the states' governors.

In concert with the state measures, it's all in an effort to control the deadly virus and prevent a catastrophic overload of the US health care system.

'A point where people can't be saved'

Medical workers from coast to coast say they're facing a dire shortage of masks, ventilators and staff as more doctors and nurses also fall sick.

New York City's 11 public hospitals will only be able to get through this week before they start reaching "a point where people can't be saved," Mayor Bill de Blasio said Monday.

"If we don't get ventilators this week, we are going to start losing lives we could have saved."

Because hospitals are about to get overwhelmed, authorities are redoubling efforts to get the public to stay home -- especially since coronavirus is easily transmitted between people who don't even know they have it.

While testing has become more available, there are still challenges -- and increased strain on the health care system.

About 254,000 Americans have been tested, Vice President Mike Pence said Sunday. That total does not include local hospitals or local health care labs, he said.

But increasing testing has put pressure on dwindling medical supplies and increased the possibility of exposure in medical facilities.

In some places, authorities have decided to test only high-risk patients or those whose results would significantly change the course of treatment.

While the United States plays catch-up with widespread testing shortages and delays, cities are getting creative in helping expedite testing.

Los Angeles is implementing a new web portal that would direct those who might be at highest risk to a testing center.

That's why new outbreaks in nursing homes have families riddled with anxiety.

At least 41 cases are linked to Briarwood Nursing Home in Little Rock, Smith said. Residents accounted for 35 of those cases, and staff members for six.

West Virginia Gov. Jim Justice said four members of the National Guard are testing everybody at a nursing home after a woman there tested positive for coronavirus.

Justice did not identify the facility nor say whether the woman is a resident or an employee. But West Virginia -- with its large populations of elderly residents and coal miners -- faces special challenges.

"We are a very high risk, if not the highest risk state," Justice said Monday.

DeSantis said the Florida facility did not take precautions against the virus, allowing staff who hadn't been screened for symptoms to freely enter the building. But Atria disputed the governor's claims.

The first known nursing home outbreak was at the Life Care Center in Kirkland, Washington. The center is linked to 35 deaths from coronavirus.

CORRECTION: This story has been updated to correct the number of people facing stay-at-home orders across the US.