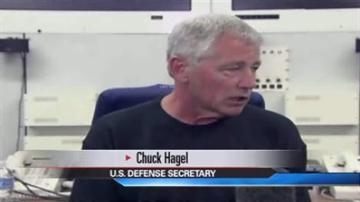 He's currently in the Middle East for his first stop on his five nation tour.

He told reporters Sunday it's still unclear whether the two suspected Boston bombers had any ties to militant or terrorist groups.

"I have not seen any intelligence that would make such a link, but as you know, all the facts are not in. All of the dynamics of intelligence is not complete," said Hagel.

Three people were killed and almost 200 injured when two bombs exploded at the Boston Marathon on April 15.

On Sunday night, one suspect is in custody and remains in serious condition at a Boston hospital.

The other suspect died.