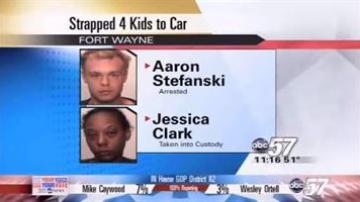 FORT WAYNE, Ind. -- An Indiana couple is locked up, accused of strapping four kids to the car and driving drunk.

A U.S. Marshal claimed Stephanski was driving with four children -- ages 4 to 7-years-old -- strapped to the hood.

Stephanski was arrested for OWI, but on Tuesday, neglect charges were also filed against the couple.