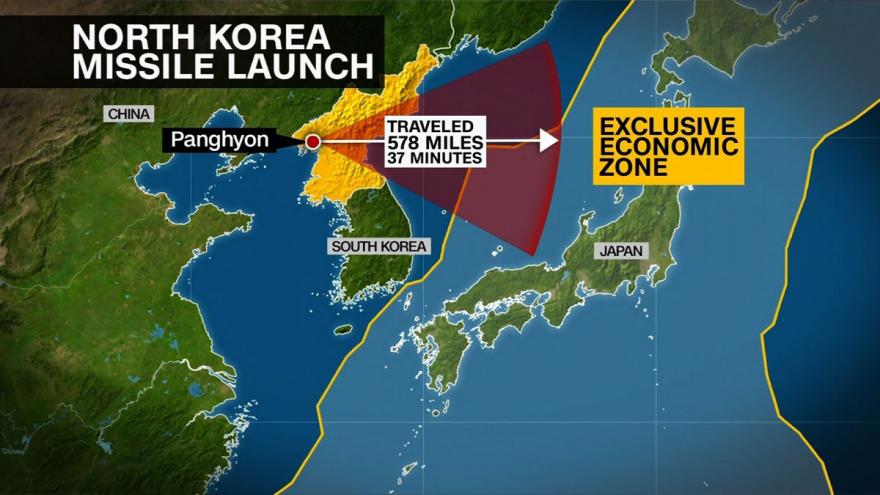 (CNN) -- US military analysts believe North Korea's launched a "probable" two-stage intercontinental ballistic missile on Tuesday, according to a US official with knowledge of the ongoing post-launch analysis.

The initial analysis by the US indicates the North Koreans launched an intermediate, a single-stage KN-17 missile. The ongoing assessment suggests a second stage booster did ignite and produced 30 seconds of additional flight.

The missile flew over 550 miles before splashing down west of Japan, according to the source.

Trump administration national security, military and diplomatic officials are continuing to hold a series of unexpected July 4 meetings to discuss what options might be needed if it is determined for certain that North Korea conducted an intercontinental ballistic missile test, several administration officials tell CNN.

US military technical experts are now reviewing all data and intelligence gathered by US satellites, aircraft and other systems to determine if North Korea's claim that it fired an intercontinental missile is true. "The claim is being taken seriously," one senior Administration official said.

Top officials at the State Department and the Defense Department are participating in the meeting. If it is determined that an ICBM was launched, the goal is for President Donald Trump to potentially approve a "measured response," one official told CNN. Nothing has been decided, but that response could include sending additional US military assets such as troops, aircraft and ships to increase the US presence in the region. Diplomatic options are also being considered including more sanctions.

If it is determined that an ICBM has been fired, the Pentagon will publicly communicate that all missile defense measures aboard Navy ships in the western Pacific and land-based missiles in Alaska are fully ready, as are missile defense systems in South Korea and Japan. The aim is to send a message to Asian allies and the world that the US stands ready to defend against North Korean aggression.

At this stage the US believes that whatever capability the North Koreans have demonstrated it does not necessarily mean they can immediately launch a working missile that can reach as far as western Alaska. And it's also not clear that the regime has a functioning miniaturized nuclear warhead.

However US military commanders have long said they plan against a worst case scenario. Admiral Harry Harris, head of the US Pacific Command recently said, "I know there's some debate about the miniaturization advancements made by Pyongyang. But PACOM must be prepared to fight tonight, so I take him at his word. I must assume his claims are true -- I know his aspirations certainly are."

Defense Secretary James Mattis also recently underscored US military policy when asked by South Carolina Republican Sen. Lindsay Graham, "Is it the policy of the Trump administration to deny North Korea the capability of building an ICBM that can hit the American homeland with a nuclear weapon on top?"

As CNN has previously reported, US military commanders have updated options for Trump specifically in anticipation of a North Korean ICBM or underground nuclear test.