US33 plan would take out part of historic neighborhood 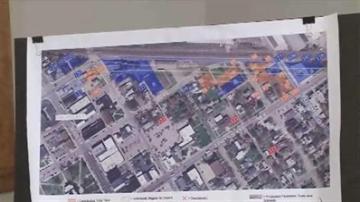 GOSHEN, Ind. -- A plan to alleviate traffic in downtown Goshen would involve taking out homes in historic neighborhoods. INDOT is discussing re-routing US33, but residents don’t want to lose their homes.

"My biggest concern is that they take my house,” said Glynnabell Robinson.

Robinson inherited her home from her late husband's family nearly 35 years ago.

“There's a lot of history in this house. He grew up in it, we went to school. My husband passed away right in the back yard so it's been me and my dog ever since then,” said Robinson.

But now Robinson's future in her husband's childhood home is uncertain. The proposed new route for US33 runs right through her backyard.

If it's approved, the new route will pick up at the intersection of Monroe and Lincoln Way and will run parallel to the Norfolk Southern train tracks.

It would take out homes on 11th street as well as 10th street and all the way up to Main Street.

In total about 40 parcels, both commercial and private, would be purchased by the state for the $25 million project.

"They're really focused on this north connector route along the railroad track. It's not a done deal yet. It's their preferred alternate but they still have to jump through the federal hoops to find out if they're going to be able to build along that route,” said Allan Kauffman, Mayor of Goshen.

Every day about 10,000-12,000 cars travel the US33 corridor through the center of Goshen-creating traffic jams and congested areas around two community schools.

"There are just a lot of problems in the current corridor,” said Mary Cripe, Goshen city engineer.

Both the city and INDOT say the new route would solve many of the city's traffic problems.

"I don't know what they're thinking about cause I don't think this bypass is going to work too good. I just don't' want to move. I'm too old,” said Robinson.

So far there have been 4 community meetings to let folks in the affected neighborhoods voice their opinions.