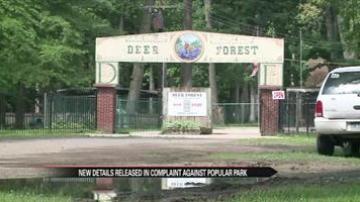 Littlejohn says he saw the violations firsthand, and they were the reason he quit.

"When he showed me the alligator pen, the fence line is that tall. Any child could climb over there and get to the fence with the alligators," said Littlejohn.

Inadequate shelter, insufficient food and improper disposal of dead animals are just a few of the violations in the 18-page document.

"I told him he need to shut the park down, do the repairs to properly provide the safety of the animals and the community and then reopen," said Littlejohn.

The park, which now goes by the Deer Forest Exotic Animal Sanctuary, remains open for business despite the allegations.

Off-camera, current manager Jon Stolarz said the park has received several complaints but "that doesn't mean they are valid."

As for what happens next, the USDA says it's up to a federal judge to decide.

"I think that is the most effective, and probably the best solution right now to this situation. The man needs to be forced to bring the place up to par," said Littlejohn.

The new managers have applied for an operating license, but that is still pending.