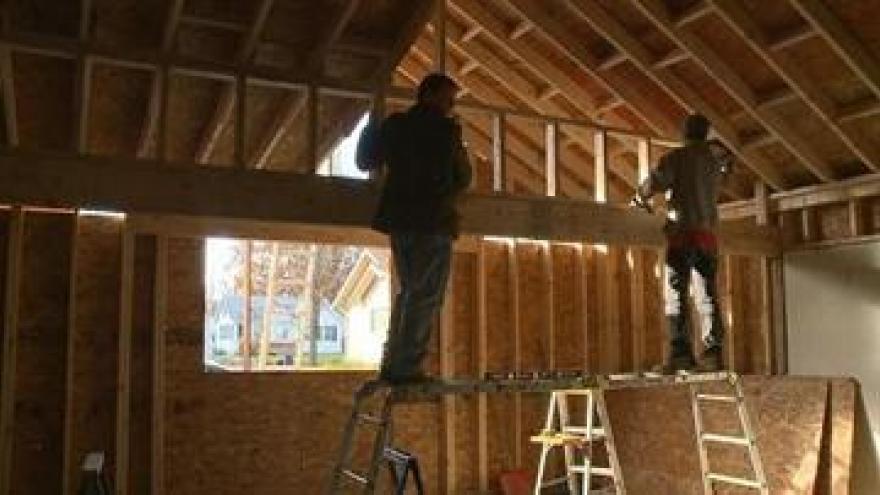 MISHAWAKA, Ind. – Fire destroys but it also brings about rebirth and; that is what has happened at Julie’s Used Appliances in Mishawaka. On Oct. 10, a fire was intentionally set at the store devastating a large portion of it.

The fire ravaged the building and destroyed several of the appliances. At the time, the owner of the store, Julie Allouch, feared she would have to let her employees go. She had no fire insurance on the business and had concerns about being able to keep the business open.

As it turned out her fears would be put at ease, at least somewhat. With assistance from family, and local businesses, Allouch and her employees began the rebuilding process.

Thursday, her crew had the structure nearly complete and they were working feverishly to get the roof finished before bad weather could move in. Working together to rebuild the structure has brought Allouch’s entire staff closer together.

The intentional attack on Allouch’s business left her employees with few options other than to fight to keep their jobs. “We weren’t here to get paid; we were here to get back to work,” said Sue English, one of Allouch’s employees.

For a week, her employees volunteered their time cleaning, building, restoring. Even now, they harbor concerns the arsonist will return. “He’s not hurting just Julie, if that’s who the intended target is. He’s hurting the people she employs,” said Donn Rupert, Allouch’s delivery man.

For now, the crew and the store’s owner continue to rebuild. Allouch has taken steps to protect her investment, and her employee’s livelihoods, by purchasing fire insurance and surveillance cameras. The hard work they have put in has not gone unnoticed by the community. “We still have people coming in. We have a good name, and they’re still coming to see us,” said Gary Diller, the store manager.