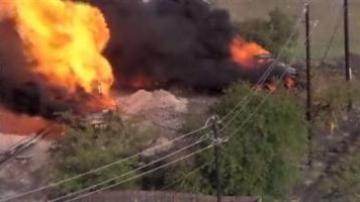 Thick black smoke could be seen from almost six miles away.

A utility crew apparently hit a gas line in the area causing the the fire.

Six people were on the scene when the accident happened but no one was injured.

The fire has now been extinguished.