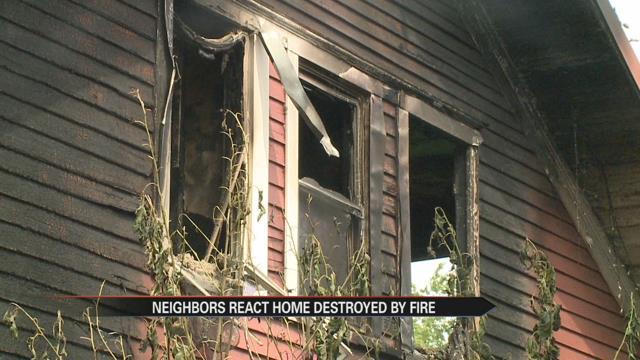 A fire in one abandoned home in South Bend is leaving a bad smell and taste in the neighborhood.

Tania Gonzalez, a neighbor of the burning home said, “there was like a man who started screaming he was like ‘Help, help, there is a house on fire!'”

That was at about 10:30 Friday night when a vacant house on East Indiana Avenue went up in flames.

Neighbors of the abandoned home say the previous tenants destroyed the property.

Gonzalez said, “They did not pick up after their dogs and you could literally smell the dog's poop all the way from our house and they had junk all over the place.”

Clark said his brother owned the home before passing away a few years ago.

“My brother put a lot of time and work into this house. He had a new roof put on he had the inside remodeled," said Clark.

But since his brother passed away, Clark says he's watched this neighborhood slowly deteriorate.

“Ever since he's been gone this little area right here this block has been going down. The people that have been moving in they really just haven't been taking care the houses like they should," said Clark.

Which Clark says has been hard to watch.

“When you live in the neighborhood and you come around every day and see it go down and down it really hurts," said Clark.

And after seeing the destruction of this fire, Clark began to tear up.

“There's a lot of memories in this house here. Every time I drive by it I think of him," said Clark.