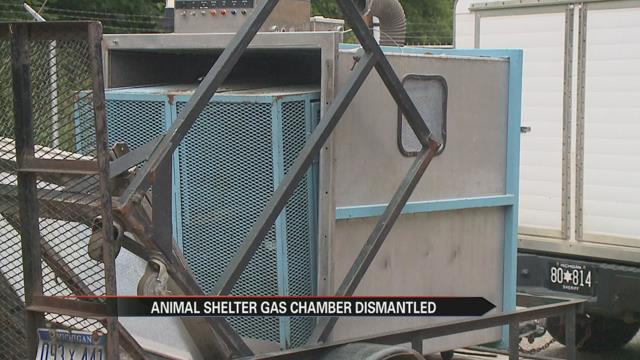 This comes after over 14,000 people signed a petition to end the use of gas chambers at animal control shelters in Cass, Van Buren, Berrien, and Branch counties.

On Thursday commissioners are expecting a large turnout of petitioners at the Berrien County Administration building in regards to the gas chamber that is still operational there.

Animal advocates said getting Van Buren County to stop using the gas chamber is a big victory, but their work is not finished.

King said, “This is really a great day for the animals of Van Buren County.”

King said, “It makes me feel it has all been worthwhile. We’ve been at this for 34 years.”

The director of the animal control kennel said she used to feel sick when thinking about using the gas chamber to put dogs and cats to sleep.

Murphy said, "Putting them into the gas chamber, you’re able to step away. You’re not the one doing it, it’s just done for you.”

Murphy said they will now be utilizing the injection method for the animals who can't be placed in a home.

Murphy said, “Anything that dies, deserves to die with somebody else.”

Gribler said, “We were waiting for the state law to come in, and perhaps get a grant to help us to move the chamber, and that never came to fruition.”

Gribler said they will use the scrap money from the "kill box," as it's commonly known, to go into the general fund.

Gribler said injection is more expensive but they operate a small facility with just 25 kennels.

Gribler said, “When you got a 20-million dollar budget for the county, for a couple hundred dollars more per year, it’s peace of mind.”

The county administrator in charge of Berrien County's Animal Control did not want to comment on the use of their gas chamber on Tuesday.

The Cass County Animal Control director said they are aware of the public's concern and they are researching the gas chamber issue.