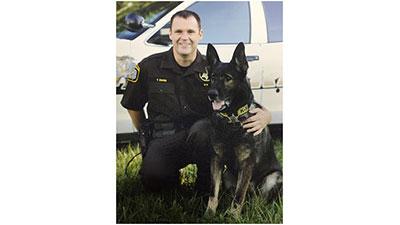 The Van Buren County Sheriff's Office announced the death of K-9 Goliath. He was 12 years old.

Goliath was diagnosed with cancer two weeks ago. He passed away on January 10th with his handler, Sergeant Tony Evans, by his side.

Goliath was born in Czechoslovakia on October 31, 2003 and was brought to Indiana a few months later.

In April 2005 he became partners with Evans.

K9 Goliath and Sergeant Evans responded to over 1200 calls for service, helped seized approximately $1.25 million worth of narcotics and the arrests of numerous subjects.

Goliath and Sergeant Evans were given the lifesaver award in 2012 for finding an Alzheimer's patient who was lost in the woods for two days.

The sheriff's office says Goliath will be missed and will not be forgotten by the Van Buren County Sheriff's Office and those he served, educated and protected.