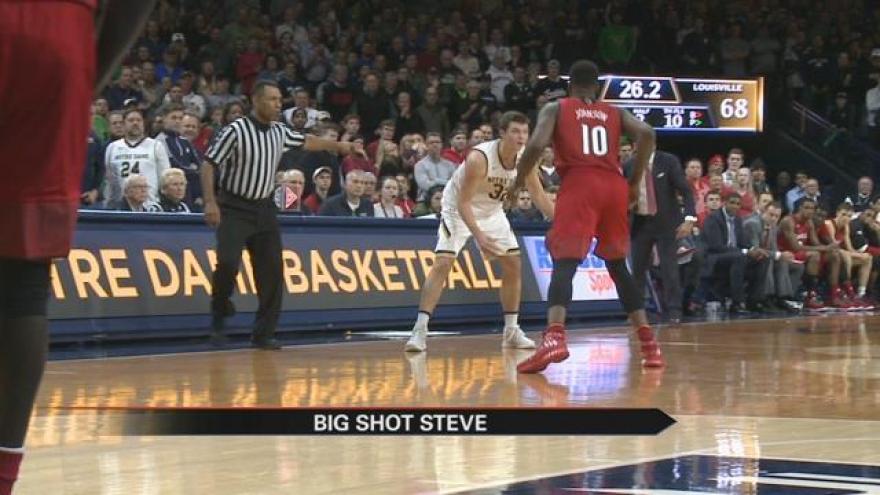 When time is winding down, there's a good chance Steve Vasturia has the ball in his hand.

The senior guard has thrust himself into crunch time for each of Notre Dame's first three conference wins. With less than five seconds to go against Pittsburgh, Vasturia found an open spot in the left corner, and knocked down a three that allowed the Irish to escape 78-77. Four days later, he was called again; only this time to ice the game when he hit a floater as he glided across the lane.

"He does set a great tone and makes us believe," Head Coach Mike Brey said.

And then there was Saturday when out of timeout, he somehow found a spot in the left corner and drained a three that put the Irish ahead for good.

"Steve throughout his whole career has been a big shot taker and a big shot maker," Brey said.

That success has carried over to his teammates.

"It's definitely contagious; you see Matty making a big shot, just so many big plays in the last three games, you know Rex making a great drive and dish to Bonzie; people just wanting to step up and have that fearless mentality," Vasturia said.

His execution in crunch time has helped the dubbed "baby-faced assassin" grab the attention of his teammates and opponents, and whatever the Irish have to do to keep it going, you bet Brey is on board, even if that means the music played at practice.

"Vasturia said Kenny Chesney so he's gone country on me all of a sudden, I don't know what's going on. I am not going to mess with though. Hey, the way he's making shots, we'll play Kenny Chesney on the bus, we'll do whatever," Brey said.