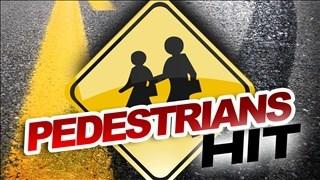 Officials with the Elkhart Police Department say officers were dispatched to the 2200 block of Cassopolis Street (State Road 19) shortly before 8:00 p.m. Friday in regards to an accident involving injuries.

Police say when they arrived on scene they found that a truck traveling northbound on Cassopolis Street struck three pedestrians.

The people who were struck by the truck were pushing a one-year-old in a stroller.

Authorities say  a 30-year-old woman was taken to Memorial Hospital in South Bend, Ind. and a 43-year-old man and a one-year-old child were taken to Elkhart General Hospital, all for what police describe as non-life threatening injuries.

The driver of the truck told police that he could not see the people walking in the roadway due to it being dark and the pedestrians wearing dark clothing.

Police say alcohol was not a factor in the crash.