Vehicles as weapons: Charlottesville crash is part of a deadly trend 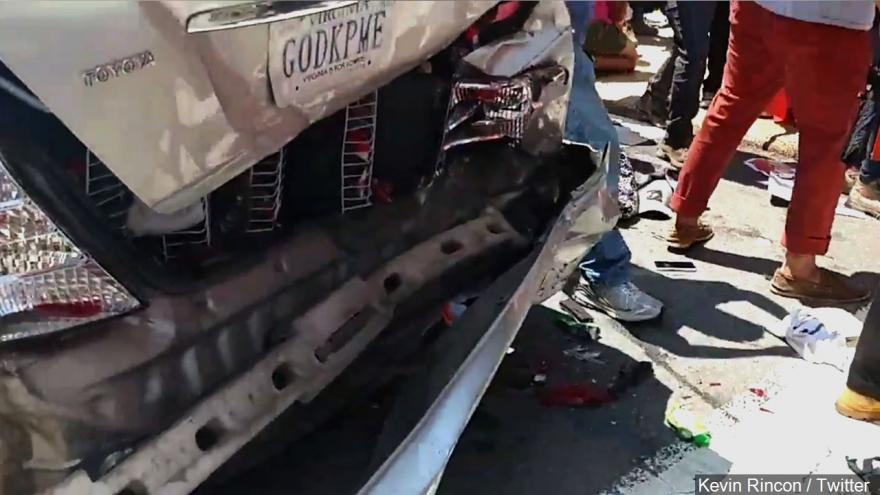 (CNN) -- When a car rammed into a crowd of counterprotesters who had gathered to oppose a rally of white nationalist and other right-wing groups on Saturday, Charlottesville, Virginia, joined a growing list of cities around the world where cars or vehicles have been used as weapon.

Videos of the incident shows at least one person being thrown over the rear of the car onto the roof another car as well as several people injured in a narrow side street in the Charlottesville downtown area.

Authorities said a 20-year-old man suspected of being the driver was taken in custody not far from the crash.

"Steal a lorry or a car and then drive it into a crowd," former Swedish Prime Minister Carl Bildt said in a tweet after an attack in Stockholm in April. "That seems to be the latest terrorist method."

Here are some of the most significant recent attacks and the reasons behind them:

Number of casualties: A 32-year-old woman was killed and 19 people were injured.

What happened: A gray Dodge Challenger rammed into the back of a silver convertible down a narrow side street lined with walking protesters in downtown Charlottesville. The Dodge driver slams the car in reverse, going back up the street at a high rate of speed, dragging its front bumper. The incident took place as a rally that drew white nationalists and right-wing activists from across the country was held in the progressive college town.

Why it happened: A suspect, 20-year-old James Alex Fields Jr. of Maumee, Ohio, is being held on suspicion of second-degree murder, malicious wounding and failure to stop in an accident that resulted in death. Federal authorities said a civil rights investigation into the deadly crash was opened hours after it happened.

Number of casualties: Eight people were killed and more than 40 wounded.

What happened: Three men drove a van into pedestrians on London Bridge before going on a stabbing rampage at bars at nearby Borough Market. They were shot dead by police.

Inside the van, police found two blowtorches as well as what appeared to be 13 Molotov cocktails. The van also had office chairs and a suitcase. Police believe the attackers told relatives they were using it to move.

Why it happened: Police named the attackers as Khuram Shazad Butt, 27; Rachid Redouane, 30; and Youssef Zaghba, 22.

Butt is believed to have associated with the outlawed radical Islamist group al-Muhajiroun, co-founded by notorious hate preacher Anjem Choudary. Counter-terrorism sources told CNN he was was considered a potential threat to British security and was still under active investigation at the time he carried out the deadly assault.

In a raid of an east London apartment rented by Redouane, police found an English-language copy of the Koran opened at a page describing martyrdom and materials that may have been used to make the Molotov cocktails.

ISIS claimed responsibility for the attack, although the group provided no evidence for its involvement or details of the attack.

What happened: A stolen beer truck barreled into pedestrians on a busy shopping street in the center of the Swedish capital before it plowed into a department store. Sweden stepped up its security. National counterterrorism, bomb and air assets also provided support.

Why it happened: The attacker, Rakhmat Akilov, had shown sympathies to extremist groups, including ISIS, Swedish police said. Akilov, 39, was from the central Asian republic of Uzbekistan. He admitted to carrying out a "terrorist crime," his lawyer said.

"All signs show he is a supporter of the Islamic State," Netanyahu said in January. "We know there is a sequence of terror attacks, and it's quite possible that there is a connection between them, from France, Berlin and now Jerusalem."