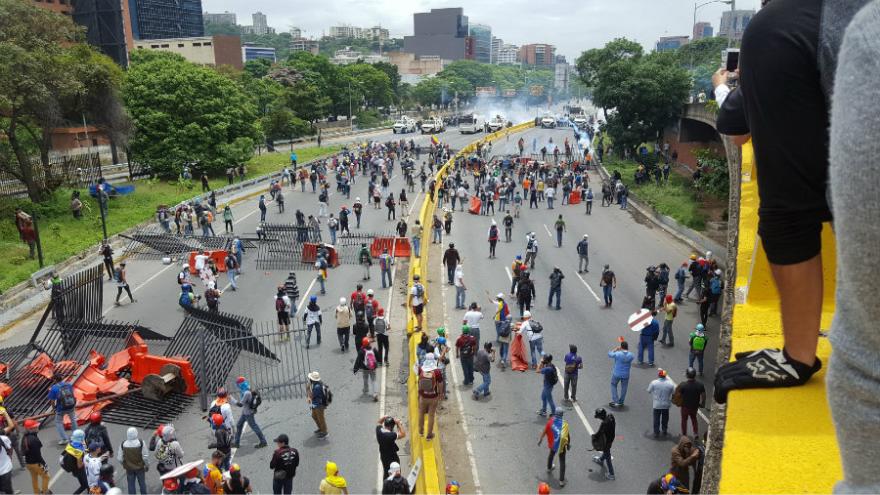 By Jason Hanna and Nicole Chavez

(CNN) -- While opponents of Venezuela's President blocked more than a dozen intersections in the capital Friday, no massive demonstrations took place on the first day of the government's ban on protests ahead of a controversial weekend election.

The regime of leftist President Nicolás Maduro said it has dispatched more than 370,000 troops across the country and has forbidden protests ahead of Sunday's election of a "constituent national assembly" that would rewrite the constitution at Maduro's request.

Members of the opposition, who are largely not running for seats on the assembly but fear that the body could give Maduro sweeping new powers, want to stop Sunday's election, and have vowed to push on with some resistance.

About 120 people gathered in the early afternoon in the Caracas neighborhood of Altamira, some of them blocking an intersection in apparent defiance of the protest ban. They were not met with any immediate police presence.

Protesters wearing masks blocked the intersection, in part by laying down bricks, wire, tires and other debris on the street. Some of them held signs critical of Maduro.

This weekend's election comes after months of sometimes deadly protests, amid an economic crisis that has seen many Venezuelans flee the country in search of easier access to food and medicine.

Protests are banned through Tuesday, and violators could get prison sentences of five to 10 years, said Néstor Reverol, the interior and justice minister.

"We will not kneel; we will not fail. We will fight," opposition leader and National Assembly Vice President Freddy Guevara told reporters Thursday, after the ban was announced.

Troops were sent throughout the country to secure preparations for Sunday's vote, Adm. Remigio Ceballos said.

Maduro, who has said that rewriting the constitution is needed to restore order, told a rally for his supporters Thursday in Caracas that he has proposed talks with the opposition. It wasn't immediately clear whether those talks will be held or what they would yield.

Opposition leaders have said they are willing to talk only if Sunday's vote is postponed.

Voters Sunday will elect a 545-seat assembly that essentially would replace the opposition-led National Assembly and will have the power to change the constitution -- changes that Maduro wants.

Though the opposition won control of the National Assembly in 2015 elections, it is essentially void because pro-Maduro legislators stopped attending sessions.

Voters are being told they can go to any polling station in their municipalities, in case protesters block access.

The new body likely would favor Maduro as opposition members largely have declined to run. Most members of the new assembly are to be elected in open municipal votes, while others will be elected by members of certain social and industry groups (like students, pensioners or workers).

Cilia Flores, Maduro's wife and a candidate for a spot in the National Assembly, has said that the new pro-Maduro members will install a commission "to determine those responsible for these terrible damages."

For months, violence has spiraled out of control as the struggle for food and medicine grows.

Political upheaval intensified in late March when the Venezuelan Supreme Court dissolved Parliament and transferred all legislative powers to itself. The court reversed that decision after three days, but the initial move triggered intermittent, deadly protests for months.

At least 112 people have died in protests and other incidents linked to the unrest, the attorney general's office has said, often without elaborating on how they died or who killed them.

At least seven of those deaths happened Wednesday and Thursday during a two-day opposition-led general strike.

Streets in some parts of Caracas and nearby towns were near-empty during the strike as some Venezuelans stayed home from work.

"All of Caracas empty, showing firmness in its objective to reach freedom," Guevara, the opposition leader, wrote Thursday on Twitter.

But hundreds of Maduro's supporters filled some streets Thursday in Caracas for a rally that marked the last day for candidates to campaign.

"We're a united people, a sovereign country ... and we walk towards victory with our President Nicolás Maduro," tweeted Rodolfo Marco Torres, a government minister.

Maduro is aligned with the political movement of Hugo Chavez, the leftist President from 1999 until his death in 2013. Under constitutional changes Chavez ushered in, presidents can run for an unlimited number of six-year terms.

Maduro, elected as Chavez's successor in 2013, has long verbally clashed with opposition leaders. The opposition wanted to impeach Maduro after it won a National Assembly majority, but he stacked the Supreme Court with his supporters, blocking any impeachment attempts.