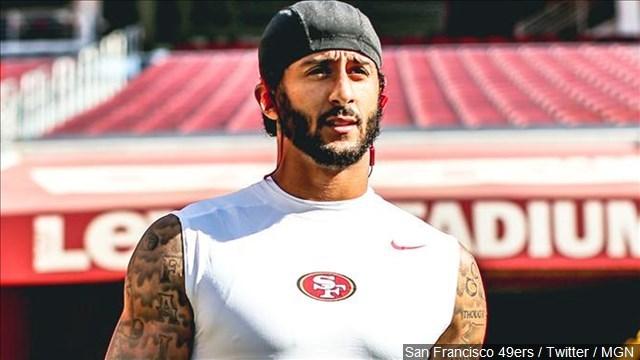 Kaepernick was criticized as being insulting to those who made sacrifices for the country. A Gold Star mom who lost her son in an IED attack in Afghanistan told CNN that her heart stopped and she lost her breath when Kaepernick said he couldn't stand for the flag. Local war veterans in San Francisco criticized him as a poor role model, according to CNN affiliate KRON. The San Francisco police union has demanded the NFL denounce Kaepernick's "foolish statements."

In another corner, some -- including activists and NBA great Kareem Abdul-Jabbar -- have praised him for bringing awareness to a major issue.

Kaepernick sat in protest over what he called the oppression of black people and people of color, during the national anthem before a NFL preseason game on Friday.

As the controversy grew, members of the military and veterans took to social media using the hashtag #VeteransForKaepernick, which started trending worldwide on Tuesday.

"It's a misconception that every military member is furious at what his protest when there are those that are proud. #veteransforkaepernick" wrote an Instagram user called TreyFade.

Americans who serve in the military are by no means a monolithic group.

Less than one-third of the US military identify as minorities (Blacks, Asians, American Indian, etc) and 12% are Hispanic, according to a 2014 demographics report of the military community.

Several veterans and service members piped up in defense of Kaepernick.

A man describing himself as an Air Force veteran wrote: "I'm with @Kaepernick7. I'm a vet. I care about people's right to take a stand. It makes us better & smarter."

Sunny Anderson, Food Network personality and a veteran tweeted: "I took an oath & served, so players on a team I don't even like could have freedom of speech."

Another tweeter listed where his military career had taken him: "West Point, Ranger School, Kosovo, Iraq, Bronze Star. @Kaepernick7 is an American hero."

A woman describing herself as a Navy wife tweeted a picture of her husband who had returned from deployment.

Kaepernick has said that his controversial stance is not directed towards people in the military.

"That's not happening. People are dying in vain because this country isn't holding their end of the bargain up, as far as giving freedom and justice, liberty to everybody."

The next 49ers preseason game will be played Thursday in San Diego against the Chargers. The Chargers are holding a Salute to the Military game, which is in its 28th annual year. The game gets heavy attendance from service members and veterans.

Deray McKesson, a leader in the Black Lives Matter movement, tweeted a political cartoon juxtaposing Donald Trump saying "America's Not Great" to a crowd of supporters cheering and one showing Kaepernick saying the same thing only to get booed.