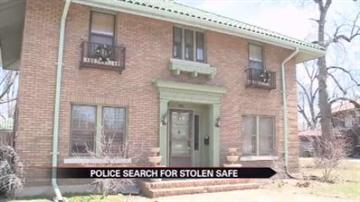 ELKHART, Ind. -- Elkhart Police are investigating the theft of a safe that contained important medical records and family keepsakes, as well as a family’s life savings. Now the owner of the safe is offering a large reward for the return of the contents of the safe – no questions asked.

"My son means the world to me. I'm a single father and he's just a very special kid. He was diagnosed with autism when he was one,” said Derek Ogawa.

"We are actually hanging out on spring break this week,” said Ogawa.

The recent break-in at their Elkhart home off Edwardsburg Avenue has dampened the spring break mood.

He says someone broke into his house and stole his safe.

"It's a pretty big safe. I mean it's going to take a man to move it,” said Ogawa.

Ogawa is working with police. He believes the safe was stolen on March 22nd or 23rd.

When he returned home that weekend he found his dogs outside.

"After rustling them up and getting them inside I noticed that my back door was open,” said Ogawa.

He says his life has been turned upside down trying to find out where the contents of the safe are. It included important paperwork from doctors on his son’s condition and family keepsakes.

"Basically his entire life was in that safe,” said Ogawa. "There are keepsakes, like his first Christmas ornament. His first of everything, you know haircut. Those mementos that you keep for a child forever are just gone."

He's offering a reward if those items are returned.

"I put out a $5000 reward,” said Ogawa. "No questions asked I would just like the contents of that safe back."