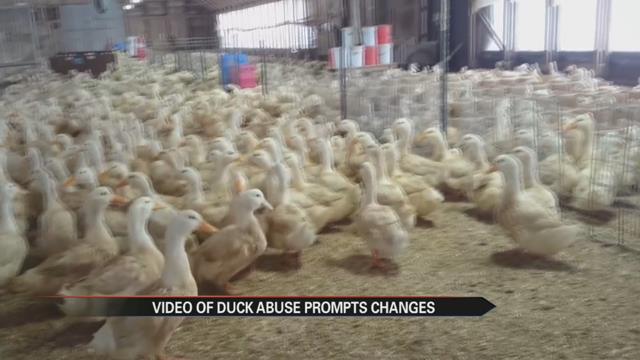 Outrage because of an online video as PETA claims over one hundred ducks were essentially tortured at a Michiana farm.

The president of Culver Duck Farms in Middlebury, John Metzger, isn't denying the undercover footage but says he wants to share the company's side.

According to PETA, it was his preferred way of killing the animal.

At one point an employee was seen twirling a duck by the neck.

"I was appalled by it, deeply saddened, I’m an emotional person too and I can understand the emotions people would see if they see that video but again it’s not what we are today,” said Metzger.

Over the course of three months, from January to March, an undercover PETA employee captured the video.

Metzger says he wasn’t in charge at that time.

Wednesday afternoon, Metzger showed ABC 57 News some of those changes.

State of the art facilities, construction to the front office, and a “Meat The Future” slogan, all brand new under Metzger’s tenure.

But PETA says the brutal killings of 118 ducks happened either way and under whose watch is not significant.

“What matters  is none of this should be happening any day under anyone watch and yet for 3 months it was the SOP way of trying to kill animals at numerous farms in Culvers owned property and also at their contractors farms, none of this is acceptable,” said Dan Paden, an employee with PETA.