Video released of deadly shooting in Tulsa after police chase 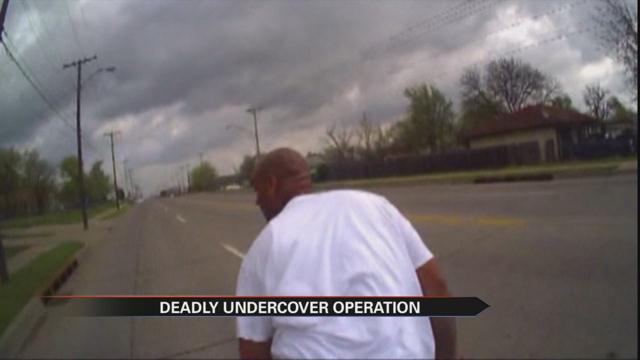 The reserve deputy who shot a suspect with his firearm rather than his stun gun, and another deputy who can be heard cursing at the suspect after he was shot, were not in their normal states of mind because of the elevated stress of apprehending the suspect, according to a Tulsa, Oklahoma, investigator.

Tulsa Police Sgt. Jim Clark, who has been brought in to review the case, said Tulsa County Reserve Deputy Robert Bates, 73, "inadvertently" shot Eric Courtney Harris after Harris -- a possibly PCP-addled felon who had days prior sold methamphetamine to an undercover officer -- ran from authorities after trying to sell an illegal handgun during an undercover sting.

As deputies tried to handcuff Harris, Bates arrived with a pepper spray gun in hand. He warned his fellow deputies he was going to use a Taser on the suspect, but instead, he fired a single gunshot -- and immediately apologized, Clark said, citing a recently released video.

Clark attributed Bates' actions to a phenomenon known as "slip and capture." An example is when someone who drives a car with a manual transmission gets behind the wheel of a car with an automatic transmission. The driver will press her or his left foot down when stopping abruptly, even though there's no clutch pedal, he said.

Quoting Bill Lewinski, executive director of the Force Science Institute, Clark further explained: "These are mistakes that are made when you think you are doing one thing but you actually are doing another, and the result often is directly opposite of what you intended. In effect, your intended behavior slips off the path that you want it to go because it is captured by a stronger response and sent to a different direction."

Bates announced that he was going to deploy his Taser, and he pulled the trigger only once, as he was trained to do, Clark said. Police are trained to "double-tap" when firing their handguns, he said. The gun jumped out of Bates' hand because he wasn't expecting recoil, Clark said, and Bates expressed surprise and remorse that he had shot Harris.

Quoting Lewinski again, Clark said, "This is the slip and capture. Under time pressure to address a perceived threat, his intention to draw his Taser slipped off his agenda, so to speak, when it was captured and completed by a more well-rehearsed motor program. ... He was not conscious of this unfortunate switch until after the shot was fired. In his urgency, his concentration was focused exclusively on Harris' back, where he intended to place the Taser darts. Because of what's called 'inattentional blindness,' meaning that he wasn't consciously paying attention to and registering it, he wouldn't have been aware that the feel of the gun was different from that of the Taser. And in this case the weight of the gun and Taser are nearly identical."

Clark was emphatic that Bates had done nothing criminally wrong and went so far as to say the reserve deputy was a victim.

When they set up the undercover sting, police wanted evidence on camera. But when they recorded the operation targeting Harris earlier this month, cameras continued to roll as the suspect ran, and as he was fatally shot.

The Tulsa County Sheriff's Office released the video on Friday. The shooting was an apparent accident, it has said.

In the last minutes of the video, Harris lies on the pavement with police on top of him. An officer calls for a Taser, but in place of an electric clicking sound, a gunshot rings out.

A voice can be heard saying, "Oh! I shot him! I'm sorry!" Another officer screams out, "He shot him! He shot him!"

Harris, who is bleeding, calls out, too. He's losing his breath, he says. An officer yells back at him.

Clark defended the officer's language, saying the deputy experienced auditory exclusion, never heard the gunshot and thought the suspect was out of breath from running. The language has no bearing on whether the shooting was justified, Clark said.

"One deputy thought he was going to have to shoot this person at the arrest site. It's very upsetting when you think you are going to have to take someone's life and this deputy, one of the involved deputies, was upset," he said. "Secondly, this is total stress. They are going after a dangerous suspect that they have no idea whether or not this person is armed."

Clark added, "They did not know that he was shot at this time. They had audio exclusion. They was at a point where they couldn't hear. They didn't even hear the gunshot go off. The officers did not know that Mr. Harris had been shot."

An officer can be seen in the video taking his foot off an object lying on the pavement not far from Harris.

Shortly after the suspect is shot, the officers begin tugging Harris' hands behind his back as the video ends.

Harris later died at a local hospital. Police said at the time of the shooting that Harris admitted to medics at the scene that he may have been under the influence of phencyclidine, a street drug commonly known as PCP.

The video is edited to block out the officers' faces. Harris is clearly visible.

Minutes earlier, Harris had climbed into a truck cab, where an undercover officer had set up a camera on the dash to record the suspect.

"What's up?" they greet each other cordially. Without missing a beat, Harris rummages deep in a backpack and hastily hands over a semiautomatic pistol. Every few seconds, he looks around outside nervously.

"Sweet, that's a nice gun, man," the undercover officer says off camera. It's a "German Luger," Harris tells him.

He cranes his head around quickly and watches as a car pulls up next to the truck. Officers in uniform jump out, and Harris bolts out the passenger door and sprints off.

As Harris fled, police worried he might still be armed because he ran with his right forearm pressed against his hip, "consistent with trying to maintain control of a gun," Clark said, adding that no gun was found when Harris was searched after the chase.

Another video from an officer's body camera picks up the chase. The officer wearing it jumps out of a vehicle and pursues Harris on foot, catching up to him easily. He tackles the fleeing suspect.

The officer commands him, "I need you to roll on your stomach. Now!" Other officers appear. Someone calls, "Taser! Taser!"

Much later in the recording made by the first camera inside the truck, two men are conversing. "He thought it was his Taser," one of them says, as the other curses in frustration.

In the background, a woman is crying "No, no, no!" Harris had come to the sting deal with a female companion.

Police have said that Harris had reached for his waistband, and officers feared he might endanger them. When Harris was on the ground, he "refused to pull his left arm from underneath his body where his hand was near his waistband," they said after the shooting.

The officer's body camera video did not reveal that area of Harris' body.

Bates, a former Tulsa police officer, was placed on administrative leave after the shooting, the sheriff's office has said.

Despite the details released over the weekend, Harris' brother says he still want answers.

"I want to know if he was shot in the back accidentally or on purpose. These are all the things that not only I want, but the public wants," Andre Harris told CNN affiliate KTUL.

Bates' attorney, Scott Wood, told CNN on Friday he would contact the network later. He had not issued a statement or called back as of Sunday.