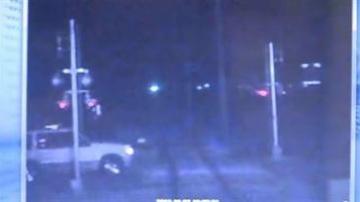 SOUTH BEND, Ind. -- ABC 57 News obtained video of the moments just before a deadly train accident that happened at the Pine Road train crossing on October 7.

The video shows the South Shore railroad crossing lights were on and fully functioning. The victim’s friends say he just didn’t see the train and are fighting to get gates installed at the crossing.

In the video, you can see a bright light on the right of the screen – that is the Northfolk Southern Train heading west.

Voreis’ friends watched the video of the crash that left his SUV a tangled mess.

“I know he didn't see him coming, because wouldn't have seen it coming, There was a big old electrical box right there, and the Northfolk train coming,” said Troy Bella, Voreis’ friend.

Friends believe Voreis was focused on the Northfolk Southern train and was inching closer to the gates because he could see the end of the train in sight.

They believe he didn’t even notice the South Shore speeding towards him at 70 mph.

His friends have started a petition to make South Shore put crossing gates in front of the Pine Road railroad tracks, so something like this doesn't happen again.

“How much ever money it's going to cost to put guards (crossing gates) there is worth it if it saves one other person's life,” said Nathan Rufer, Voreis’ friend.

Bella said a petition to get gates up at the Pine Road crossing was circulating at Voreis' viewing and funeral. However at this point the petition sheets are full.

ABC 57 News will let the public know when and if the petition is open to the public for support.