Vigil held for 11-month-old after mom charged with murder 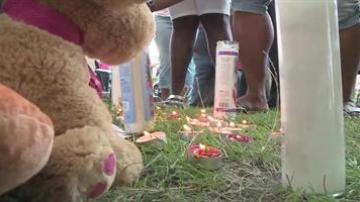 SOUTH BEND, Ind.-- Nyesha Crockett plead not guilty to murder, neglect of a dependent, and battery after her 11-month-old died on Monday. On Tuesday the baby's father held a vigil to remember his son.

Dozens of people showed up to the candlelight vigil with teddy bears and notes to honor Micahyah Crockett who was allegedly beat to death and smothered by his mother.

His father said it all comes as a huge shock.

Micahyah Greer said, "My chest hurts, I think about it consistently. I don’t know what to feel. There’s not a word to describe it. No feeling to describe it. A part of me is missing.”

Greer said he's thankful for the outpouring of support from the community during this tragic time.

According to the court affidavit, Crockett and Greer's other child, Alaiyah Crockett, is on life support from injuries she obtained in February while staying with her mom.

Nyesha Crockett's Aunt and Uncle said they believe she is suffering from postpartum depression.

La’Jenita Anderson said, “We are all trying to figure out if it was our fault. Were we not there enough for her? Because at the end of the day we didn’t just lose a baby. We lost all three of them. She be doing time in jail. We have to bury one. And the other one is in a vegetative state.”

Anderson said she never witnessed her niece abuse a child, and their family is devastated.

“She didn’t come to us and talk about anything, we didn’t know any of this was happening. We didn’t know it had happened to' layah,' we all thought it was an accident. And when we got the news of what had happened it hurt us all.”

Funeral arrangements for baby Micah are pending.
Share this article: