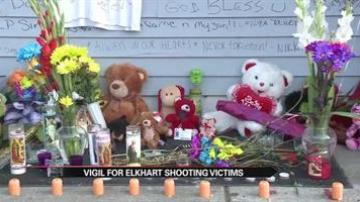 ELKHART, Ind. -- An arrest has been made in the double murder of 55 year old Jagtar Bahati and 20 year old Pawan Sing. Thursday's shooting is still affecting the Elkhart community.

Through prayers and song, this Elkhart community came together to remember the good in the two lives taken Thursday morning.

Tragedy. That's the only word this community can find to describe what unfolded inside Saleh's Market in Elkhart.

“I just want to show concern because lives should not be taken like this," says Dionell Hill.  "They shouldn’t.”

Friday night, the customers remembered the victims, who they considered friends.

“I come here everyday and buy soda from him. I hang out with him and joke around with him,” says Twila Kleitz.

Now all they can do is leave their thoughts on the walls near the store.

“I said rest in peace and they will be truly missed and put mine and my husbands name,” says Kleitz.

“The community at large, has love, concern, and heartfelt sympathies for the loss,” says William Sinclair.

And as the sun began to set outside the market, Hill preached to the crowd to respect themselves and live a life filled with love instead of hate.

“Because our actions are speaking very loud,” says Hill.