Violent home invasions on the rise in St. Joseph Co. 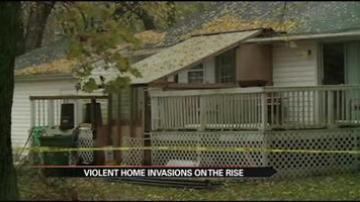 ST. JOSEPH COUNTY, Ind. -- A St. Joseph County man remains in the hospital after he was shot by two men who broke into his home Tuesday night. Police say they are seeing more violent home invasions lately.

Tuesday night's home invasion happened at a house on the corner of Fillmore and Peppermint Road.

The homeowner told police he woke up to find two men standing in his bedroom. Seconds later they shot him.

It isn't the first time police have been to that residence.

"The officers that work this area are familiar with this residence. It's a house they've been called to on several different occasions," said Lieutenant Matt Blank with the St. Joseph County Police Department.

Blank says what happened and why is still unclear.

What is especially concerning is that this type of crime is on the rise. There have been several break ins over the last month or two, but he says they do not appear to be connected.

"Each one seems to be motivated by something different. They don't appear, most of them, to be connected in any way. So why we're starting to see a surge of this type is unclear," said Blank.

Blank says the break-ins on Ivy Road and in Clay Township appear to be random, but the others, like the one Tuesday night tell a different story.

"We don't think this is something area residents should be worried about. We believe it's isolated," said Blank.

It's very important if you see anything unusual to call 9-1-1.

"Often times after a crime has been committed we get people calling in saying I saw a car that matched that description or I thought I saw something strange but I didn't think to call it in. and that would have made the world of difference," said Blank.