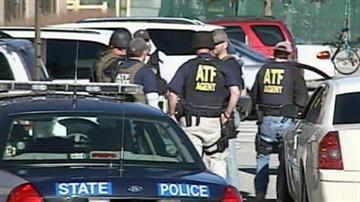 BLACKSBURG, Va. -- A manhunt that locked down Virginia Tech University came to an end today when police indicated that a gunman who ambushed a cop on the campus later died of gunshot wounds.

It was the second time the Blacksburg, Va., school became the scene of a gunfire since the 2007 massacre of 33 students.

Police declined to say outright that the second shooting victim was the gunman, but said "no additional victims or shooting reports have given to the police" since the second person was shot.

"I think the investigators feel confident that we've located the person, but I don't want to give you specifics," Virginia State Police Sgt. Robert Carpentieri said at a news conference. "You can kind of read between the lines."

Authorities also clarified that the police officer who was killed was performing a routine traffic stop when someone walked up to the officer's car and shot him.

The identities of the victims have not yet been released and authorities say the motive is currently unknown and under investigation. The officer was a four-year veteran and police said they believe this is the first time a Virginia Tech officer has been shot in the line of duty.

The shooting, which occurred shortly after noon, triggered sirens and alerts telling students to stay locked inside.

An alert on the Virginia Tech school's website said: "There is an active campus alert in Blacksburg. Everyone should seek shelter or stay where you are. Blacksburg Transit service is suspended until the alert is lifted."

"During the traffic stop, the officer was shot and killed. There were witnesses to this shooting," Owczarski said in the statement.

Freshman Juliette Fielding came upon the officer's shooting moments after the gunman fled and while warning sirens blared across the campus.

"I was coming out of the gym and just walking on the sidewalk to go home to my dorm. I saw the police car sitting there and I thought it was responding to a call here," Fielding said.

She walked towards the car, thinking she could go around it before other police cars arrived.

"The police pulled up and they opened his car door and as soon as they opened it, he just fell out towards the ground," Fielding said through tears. She said the officer's face was covered in blood and the other cops immediately began efforts to revive him.

"When the other officers started yelling his name to try to get him to wake up, that's when it really hit me," she said. "As soon as I saw his face, I just started crying."

Fielding said that two officers ran off with "really big" weapons and started running in the direction after the gunman as the shot officer lay on the ground.

"I guess the officer didn't make it because they just covered him with the sheets," Fielding said.

"As soon as I saw his face, I just started crying," she said.

Owczarski said the officer was the first person to be shot.

"Witnesses reported to police the shooter fled on foot heading toward the Cage, a parking lot near Duck Pond Drive. At that parking lot, a second person was found. That person is also deceased," he said.

Owczarski said police launched a dragnet for the gunman. "We are searching all buildings and open spaces," he said.

"The campus community should continue to shelter in place and visitors should not come to campus," he said.

The suspect was described as a white male wearing a gray sweatpants, a gray hat with a neon green brim, a maroon hoodie and a backpack.

Wednesday was the school's last day of classes for the semester and today is Reading Day, a day for studying on which classes are not held. Fall semester final exams were scheduled to begin on Friday, but they have been postponed.

The day's calm was shattered when warning sirens blared at the same time that security alerts were blasted on Twitter and Facebook.

When asked to compare today's events with the 2007 carnage, Owczarski said, "Every case is unique, every case. 2007 and today are tragic. We're responding in the most efficient and effective ways we can."

Virginia Tech was the site of the deadliest mass shooting in the United States in 2007 when Seung-Hui Cho killed 33 students, faculty members and himself during a shooting rampage on the campus. Cho was a senior in English at the school.