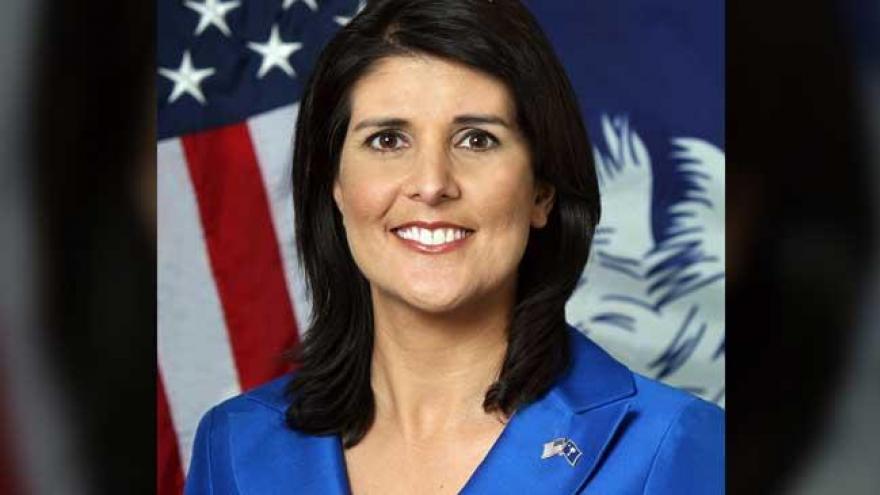 (CNN) -- US Ambassador to the United Nations Nikki Haley was moved to tears Thursday during a visit to a camp for Congolese people displaced by violence in the country.

During her last stop on a three-nation tour that also took her to Ethiopia and South Sudan, Haley made an emotional visit to the Mungote camp, where she heard harrowing stories of women suffering sexual violence, early marriage and giving birth in the camps in unsanitary conditions.

Haley met Angelique -- a single mother of seven children, who broke down as she told Haley about how she had been raped repeatedly.

"It's hard for her when she sits in the kitchen with her seven children because they watched her getting raped," Haley said. Angelique's husband left her because he could not handle the stigma.

Congo has been beset by violence from armed groups in the country, forcing 4.5 million Congolese to flee their homes. Most of them are displaced inside the country at camps like Mungote.

"No one should live like this," Haley said. "We can't turn a blind eye to all of this."

UN peacekeepers kept watch during Haley's visit to the camp. Congo is home to the largest and most expensive UN peace-keeping mission, at a cost of $1 billion a year, of which the US is the biggest contributor. Haley has focused on cutting the UN peacekeeping budget since taking office.

She was moved to tears when dozens of young children ran after her, waving as she was leaving the camp. Haley waved enthusiastically back as she boarded her UN helicopter back to base.

"The reason I got emotional today was the hundred-plus kids that were chasing our cars and seeing us off," Haley told the few reporters traveling with her. "All I kept thinking was, what's going to happen to them? The sad reality, as it looks now, is that they are going to end up just like their parents."

Congo is the last stop on Haley's three-nation swing through Africa, which also took her to Ethiopia and South Sudan.

On Friday, Haley will meet with Congolese President Joseph Kabila, whose second term ended in December. Kabila, who succeeded his father in 2001, is refusing to step down from power. He is now trying to change the constitution to complete a third term -- despite an agreement reached by his representatives and opposition leaders on December 31.

Though Haley didn't mention Kabila by name, she suggested it was time for him to go.

"We have to find a way to have a peaceful situation, we have to find a way for them to have safe and fair elections, so we that we can get some leaders that know how to handle this situation and get these armed groups to stop," she said in the Mungote camp. An aide to Haley said she was expected to tell Kabila he should set a date for elections and the peaceful transition of power.

A report on the conflict by the UN Secretary General's representative for the DRC said, "the prospects of a deepening political crisis and further deterioration of the security, human rights and humanitarian situation cannot be ruled out." A delay in elections, the report warned could cause a further challenge to Kabila's legitimacy and "foster the proliferation of armed groups and uprisings across the DRC, which would have profound implications for the stability of the country and region as a whole."

Anti-Kabila protestors ran after Haley's motorcade as it was pulling out of the UN base, some of them treated harshly by local government forces.

The protesters sent a letter to Haley, asking the US to intervene. The letter noted the 4.5 million Congolese forced from their homes "is the equivalent to the population of South Carolina," where Haley served as governor before moving to the UN.

"What do you think is going to happen in the next 12 months if you continue to let Kabila continue chaos as a sole means to maintain power?" the letter asked.

Though Haley said the day was heartbreaking, she found inspiration from a group of 50 women who started a bakery. They started making bread because it was unsafe to leave the camps, but over time they started a collective to turn a profit and told Haley they want help to expand.

"They just bought a sheep with the profits that they made," she said. "So, it's inspiring to see they're not just sitting here complaining, they're trying to make the best of the life that they have."