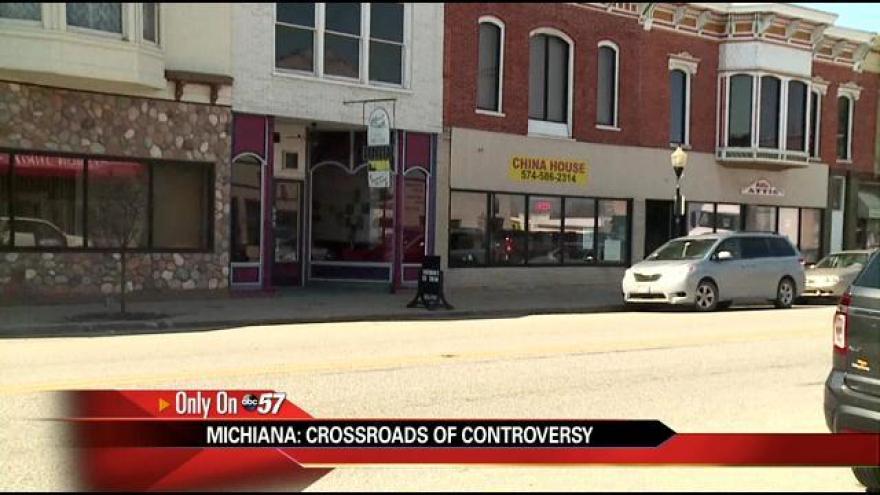 The town of Walkerton and the Memories Pizza restaurant have gained national attention after an ABC57 story Tuesday evening. The restaurant's owners support the Religious Freedom Restoration Act.

The story has been repeated on ABC News, Buzzfeed, Gawker, CNN and many other national news outlets.

The comments that sparked controversy were made by Crystal O'Connor and Kevin O'Connor.

“If a gay couple was to come and they wanted us to bring pizzas to their wedding, we'd have to say no,” said Crystal.

Those words have sparked a deeper conversation about Indiana's Religious Freedom Restoration Act.

It has also put a dark cloud on Memories Pizza, from bad Yelp reviews to a man standing outside their restaurant carrying a sign that says “bigots.”

“If you're going to discriminate against someone for their sexual orientation that's just not right,” said James Cain, the sign holder.

Cain says he doesn't buy the O'Connors' response when they said they'll serve gay couples, just not cater their weddings.

“I mean who has pizza at their wedding receptions?” said Cain.

Cain believes it's all the same thing.

“To me I took that as well we're Christian and if you're gay we're not serving you,” said Cain.

Cains' opinion is not shared by all in Walkerton.

“I don't see how it affects the nation,” said Walkerton resident Brandon Dickson.

Dickson is standing by the O'Connors because they have every right to believe what they want.

“I'll still go in there and buy pizza. I have no problem with that at all. I think what they did, that's their opinion. You can't take that away from them with what they want to do,” said Dickson.

He hung a sign out of his window that reads, “What do you expect, that's Walkertucky.”

“That's just another name for Walkerton. It's how we say Walkerton,” said Dickson.

He says he shares the same beliefs of many in his town.

He's proud of the O'Connors for speaking freely on such a controversial topic.

The O'Connors' restaurant opened at 4 p.m., but they have not made any comments.