Wanted LaGrange County man turns himself in after fleeing from police 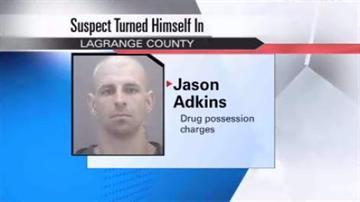 LAGRANGE COUNTY, Ind. — A wanted man in LaGrange County has turned himself in to authorities.

Jason Adkins, who was wanted on several outstanding warrants and additional charges of possession of methamphetamine, spoke with police Sunday and later turned himself in at 2:30 p.m.

On Friday, Adkins was involved in an accident in LaGrange County where he fled from police. Adkins left behind two passengers, Brianne Benac and Jeremy Brock.

Police say the car had "several items associated with the manufacturing of methamphetamine" inside.

Both Benac and Brock were arrested for possession of methamphetamine among other charges.

According to police, officers searched for Adkins at the scene of the crash for about two hours.

Police have been searching for Adkins since May. After his arrest Sunday, he was taken to the LaGrange County Jail where he is being held without bond.