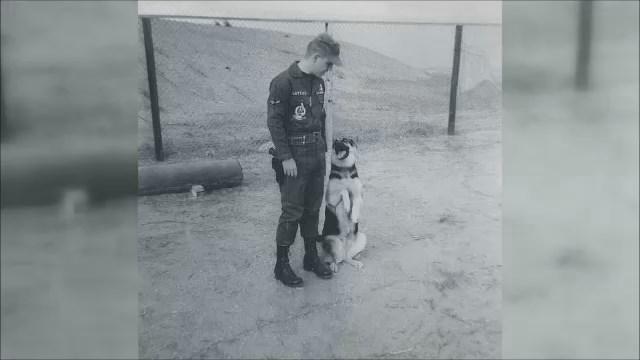 Several K9s recently received a special donation from someone who says he knows them pretty well.

Bill Lutz and his daughter Jennifer made a donation to the La Porte County Sheriff’s office and their K9’s last Friday.

“It was merely a 71st birthday present for me but Jennifer was behind that and made the donation and the tube of tennis balls for each of the dogs. it was quite a surprise to me but I think it was very unique,” said Bill Lutz.

Bill is a Vietnam War veteran who had a special relationship with K9’s in the United States Air Force.

“I went over to Okinawa in ’63. It was a Black Ops operation over to Vietnam over to Tan Son Nhut. We had really no idea what we were in for other than we had all our gear and our dogs with us all loaded on the C-130 aircraft, things sitting on the web seat with the dog between the knees and off we went. First fire fight was Valentine’s Day. But I learned very quickly the first shot was at the dog, second shot was at the radio, third shot was at me on point. I couldn’t believe my dog was shot,” said Lutz.

La Porte County deputies were so touched by the donation they shared it to their Facebook page. Based on his past experience bill understands the important role K9s play.

“We couldn’t do it without ‘em. They protect our way of life. Incredible bunch of people… great bunch. But I get a little heavy-throated when I talk about them,” said Lutz.

Bill says he's involved in several veteran-driven activities and will continue to do his job in spreading awareness of the sacrifices they have made.